It has been nearly seven years since Apple launched the record-breaking iPhone 6 and iPhone 6 Plus. It is only now that the company’s iPhone 12 series has reached a new shipment milestone, tying the achievements of the first two models. According to the latest data report, Apple’s flagship mobile phone products have shipped more than 100 million units worldwide. The iPhone 12 series achieved this milestone in just seven months. This record is equivalent to the record held many years ago. 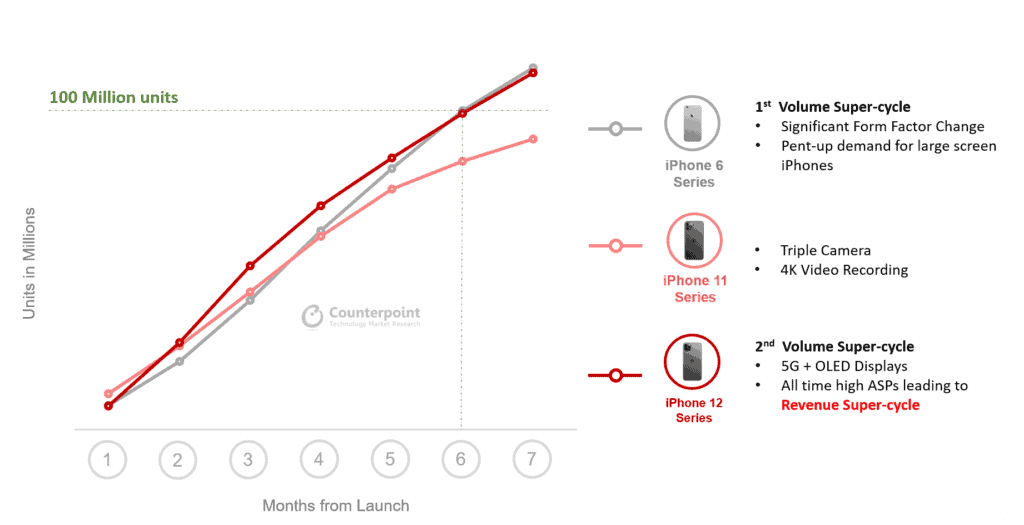 According to data from Counterpoint Research, Apple’s iPhone 12 series has sold more than 100 million units. This is the first iPhone supercycle since the iPhone 6, which is a wave of massive replacements. Actually, the iPhone 12 series exceeded the 100 million units mark in April this year. This shows that the goal was achieved within 7 months of the device’s release. The iPhone 11, released in 2019, had a sales volume of over 100 million and took 9 months. The iPhone 6 that year was less than 7 months old, with sales exceeding 100 million. That year, the high sales volume of the iPhone 6 was due to the larger screen. This time, on iPhone 12, consumers mainly value new features such as 5G network and OLED screen.

Counterpoint Research also said that during the release of the iPhone 11 and iPhone 12 series, customer preferences have changed. Among the latest products, the largest model iPhone 12 Pro Max is the first choice. It has accumulated a 29% market share, while the iPhone 11 Pro Max has a 25% market share.

Since the iPhone 12 Pro Max starts at US$1,099, the higher shipment volume of this model means that the company’s revenue will increase and contribute to the super cycle of revenue.

Next MIUI Pioneer Team responds to complains on MIUI camera