ZTE announced the launch date of the much-awaited ZTE Axon 30 5G phone, and key specs of the device have been revealed. On July 19, the tech company said that it will announce the 5G-enabled smartphone on July 27, at 7 PM (local time) in its home country, China. The phone will house a second-generation in-screen front shooter.

As the name suggests, the phone is the successor to the well-received Axon 20 5G that was launched back in September 2020. The Axon 20 5G was the first phone to come with an in-display camera. China’s TENAA certification website recently listed a ZTE phone carrying model number A2232. This could be the hotly-anticipated Axon 30 5G.

The Chinese phone maker released an official poster of the Axon 30 5G phone, which confirms that it will be available in blue, white, and black color options. Moreover, the device shown in the poster seems to be a leatherback edition. The phone doesn’t have a notch or a hole punch to accommodate the front camera since the front shooter is placed under the device’s display. 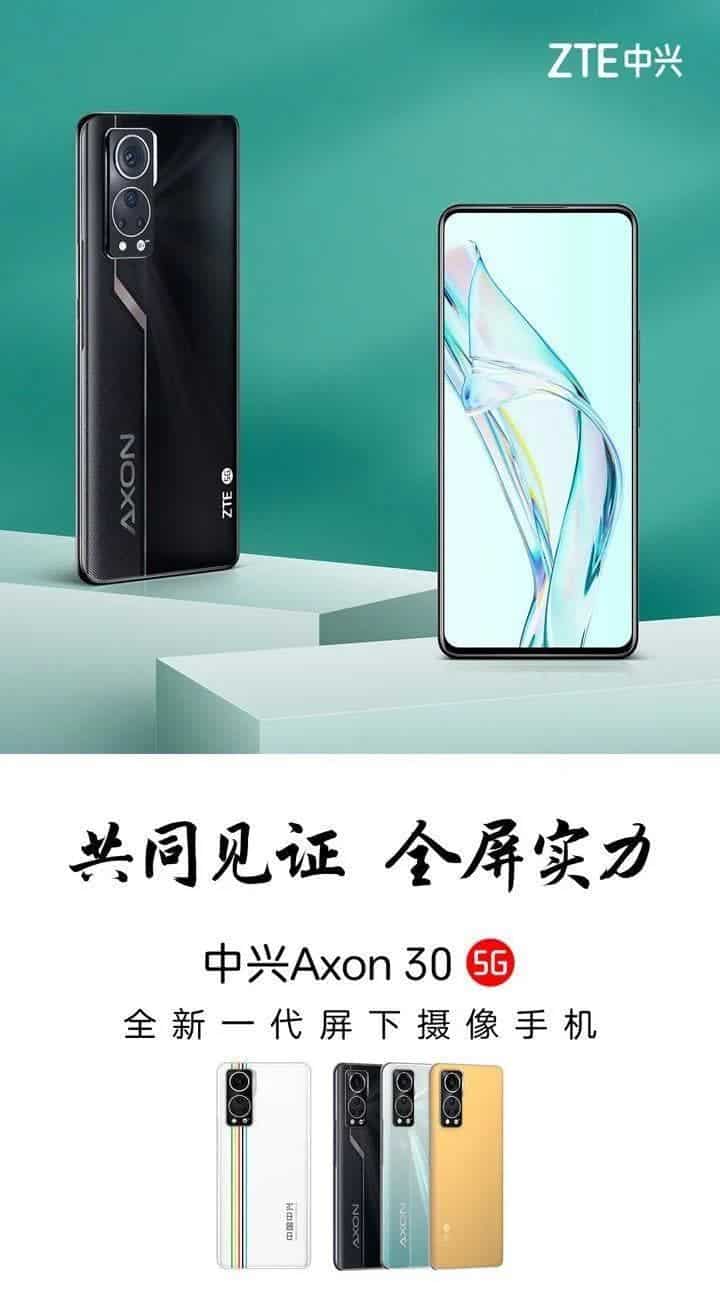 Furthermore, there are two rings, housing the phone’s cameras at the back. The upper ring is likely to hold a 64MP main camera. The lower is expected to accommodate three auxiliary lenses. On April 15, ZTE launched the Axon 30 Ultra that featured a 16MP selfie camera, along with the company’s Trinity triple main camera. The Axon 30 5G is could take the photography capabilities of its predecessors, up a notch.

The Axon 30 5G phone’s dimensions are 170.2 x 77.8 x 7.8mm, and it weighs 190 grams. Aside from that, the phone sports a mammoth 6.92-inch OLED display with a high screen resolution of 1080 x 2460 pixels. In addition to the aforesaid 16MP in-display selfie camera, the screen also features an embedded fingerprint scanner.

The phone packs a powerful 3.2GHz octa-core processor. This could be Qualcomm’s Snapdragon 870 SoC. Moreover, the phone is likely to draw its juices from a 4,100mAh battery. The battery will reportedly support 55W rapid charging. It will go up for sale with 12GB, 8GB, and 6GB RAM. In terms of storage capacity, it will come in 512GB, 256GB, and 128GB configurations in China. The Axon 30 5G runs Android 11 Os with MiFavor UI on top.

Earlier this month, some insiders posted photos of what appears to depict the ZTE Axon 30. The company hinted at an impending launch of a phone that boasts a staggering 20GB of RAM. Even before the AXON 30 passed through certification, the company had already made this announcement.