The South Korean company LG Display released its performance indicators for the second quarter of the current fiscal year. The results, as noted, were higher than analysts’ forecasts.

Revenue for the three-month period amounted to 6,966 billion Korean won, or approximately $ 6.0 billion, which is almost a third (31%) more than last year’s result.

Net profit of LG Display amounted to 424 billion Korean won – about $ 367 million. The manufacturer was able to improve its financial performance, including due to the increase in panel prices.

During the quarter, shipments of the company’s displays totaled 8.9 million square meters. The average cost of panels for the year has risen from $ 654 to $ 703 per square meter. 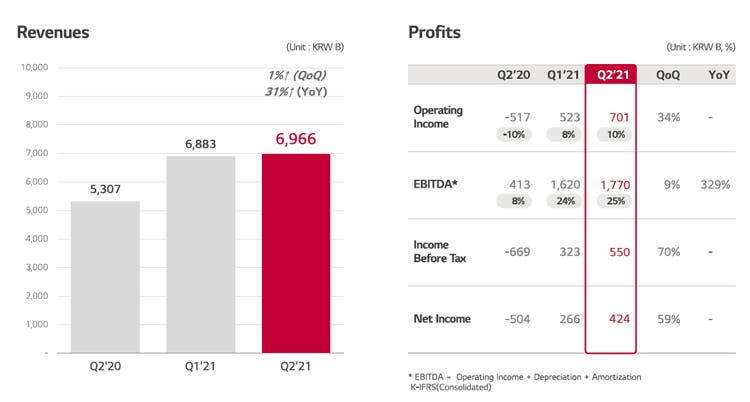 In the spring of 2020, South Korean companies LG and Samsung had already decided to phase out LCD panel production by the end of the same year, but the pandemic intervened with its requirements for self-isolation, and TV sales soared, pulling prices for LCD panels with it. The producers of the latter did not give up such a “gold mine”, but the situation is gradually pushing them towards the original decision.

In any case, industry analysts surveyed by Business Korea share this point of view. The fact is that the average selling price of 32-inch LCD panels this month fell for the first time in 14 months, although it is still twice the level of the same period last year. If prices decline at such a pace, then by the end of the year the price of a panel of the specified standard size will drop from the current $ 87 to $ 68, and the entire market will follow this trend.

At a certain stage, Samsung Display and LG Display will again become unprofitable to keep the production of LCD panels for TVs, and they will embark on a long-planned plan to expand production of more modern panels such as QLED or QD, for example. In this case, the production of panels of the old type can be completed even before the end of next year, because the companies tried to navigate for such a period in the midst of a pandemic, when prices for LCD panels continued to rise.

Next Huawei P50 Pro 4G full specs have been revealed