This morning, many Mi fans were talking as the Xiaomi Portugal Store announced on the official social media webpage that the Mi Store Portugal will accept purchase through cryptocurrencies such as Bitcoin, Ethereum, TEDA and others.

What Did Say Mi Store Portugal?

In fact, Xiaomi Portugal Store stated that from now on, users can use Bitcoin, Ethereum, TEDA and Dash to buy smartphones, vacuum cleaners, smart watches, electric scooters and other Xiaomi devices. This caused a lot of stir on the net. And many were wondering why Xiaomi doesn’t accept cryptocurrency payments on other markets as well.

At the moment of writing this article, Mi Store Portugal had removed the post. Fortuntaly, ITHome has managed to take a screenshot. 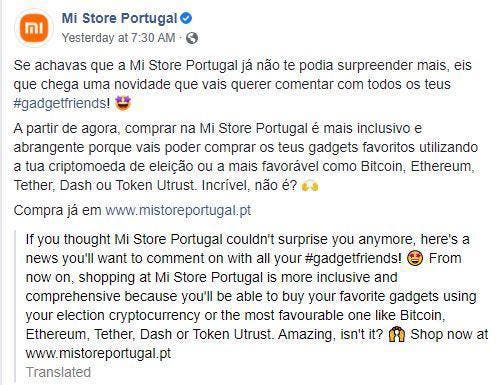 In this regard, Xiaomi’s spokesperson Guan Wei also made an official reply, saying that “today we are concerned about the information that Mi Store Portugal accepts encrypted digital currency payments on overseas social platforms.”

After investigation, Mi Store Portugal issued a statement, saying that they are a third-party partner. So they independently operate locally and are not related to the operation of Xiaomi.

This means that Xiaomi itself does not accept virtual currency payments abroad. This operation is an independent policy of local partners and Xiaomi has no control over it.

Which Companies Do Accept Cryptocurrency Payments?

As early as June of this year, there was an interesting interview with the People’s Bank in China. The relevant departments of the People’s Bank of China pointed out that virtual currency trading activities disrupt the normal economic and financial order, breed the risks of illegal cross-border transfer of assets, money laundering and other illegal and criminal activities, and seriously infringe the people’s property safety. In other words, they prove that at this stage cryptocurrencies can’t be considered safe.

However, we should take this information with a pinch of salt. Xiaomi is not the first and the last company to accept cryptocurrency payment. For this, Euronews has published an interesting article showing which major companies accept it. Among them, we can find Microsoft, Starbucks, Tesla, Amazon, Visa, PayPal, Coca Cola, etc.

Moreover, when coming back to smartphone makers, recently, OnePlus was asking its users whether they had encountering problem when investing in or holding cryptocurrency. It also tries to understand the usage of any crypto wallet such as Coinbase Wallet.

Next Xiaomi Responded To Xiaomi Mi 11 WiFi 6 Problem: Users Can Replace Their Phones