At the end of last year, the company launched the Xiaomi Mi 11 series smartphones. It’s the company’s current annual flagship. So that’s quite logical our protagonist will come with a number of latest hardware and software features. Plus, it has many innovative technologies. In this sense, no one shouldn’t be surprised to see the phone supports the latest WiFi standard. As you know, it is the WiFi 6 (Enhanced Version). The bandwidth is twice as high as the previous generation, reaching 160MHz bandwidth. At the same time, the transmission information density is increased by 20%. The final network speed is 2.1 times faster, up to 3.5Gbps. This standard also supports 4K QAM encoding for the first time.

However, some users found that their Xiaomi Mi 11 series mobile phones had special Wi-Fi problems, such as the inability to turn on Wi-Fi and hotspots.

In this regard, Xiaomi officially responded today and made it clear that users with such phenomena will support replacement of new phones after testing. Moreover, after replacing the machine, or if there is no problem but have concerns, you can apply for a half-year extended warranty service.

What Does Xiaomi Offer For Xiaomi Mi 11?

The following is the full text of the “Service Policy on Special Issues of Mi 11 Series Products”:

Currently, there are a few model in this line. But the Mi 11 Pro and Ultra are the strongest models of the firm. The highest price of the Mi 11 Ultra has reached 6,999 yuan ($1082). Thus, we are dealing with genuine flagship phones with corresponding prices. So Xiaomi’s solution is quite understandable. 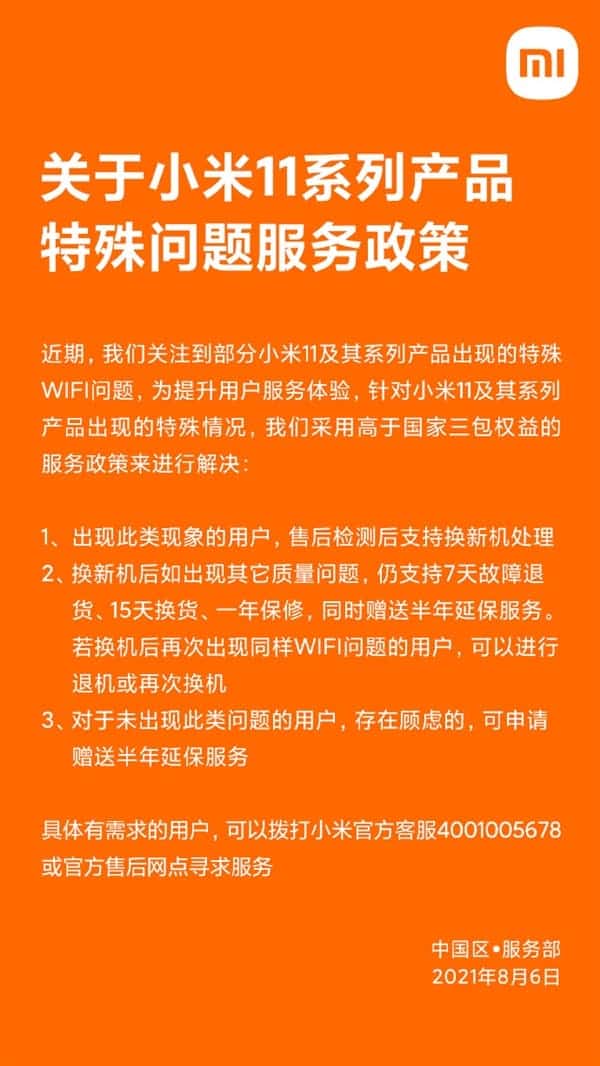