Not so long ago, Xiaomi released a teaser that announced the premiere of the newest flagship Mi MIX 4 tomorrow, August 10. And now the full characteristics of the model have appeared on the Web: according to available data, the information was obtained from the file of the company’s official presentation.

Xiaomi has already released a video that makes it clear that the smartphone will receive a bezel-less display without a hole for a selfie camera – it will be hidden under the screen. Now it became known that the Mi MIX will use a matrix with a pixel density of 400 ppi. According to the Sparrowsnews portal, although the PPT presentation received from anonymous sources reveals literally all aspects related to the design and construction of the smartphone, the editors decided not to share the entire presentation until the official release. Nevertheless, they published the characteristics of the device.

The Mi MIX 4 will be equipped with a 6.67-inch AMOLED display with a resolution of 2400 × 1080 pixels. Dolby Vision and HDR 10+ technologies are available, True Tone color gamut also. In addition, the display has Corning Gorilla Glass Victus protection. We know that only the lower part of the frame will be slightly visible on the screen.

Also, the main camera has a 108-megapixel Samsung ISOCELL HMX sensor, a 13-megapixel ultra-wide-angle camera and an 8-megapixel module with a periscope lens providing 5x optical zoom. Under the display is a selfie camera with a 20-megapixel sensor; which provides for the fusion of pixels “4-in-1” up to 1.6 microns.

In addition, we also know that MIX 4 received a Qualcomm Snapdragon 888 Plus chipset with a maximum core frequency of up to 3 GHz and artificial intelligence algorithms. The smartphone has a 4500 mAh battery with support for fast wired charging; with a capacity of 120 W and wireless – 50-80 W. 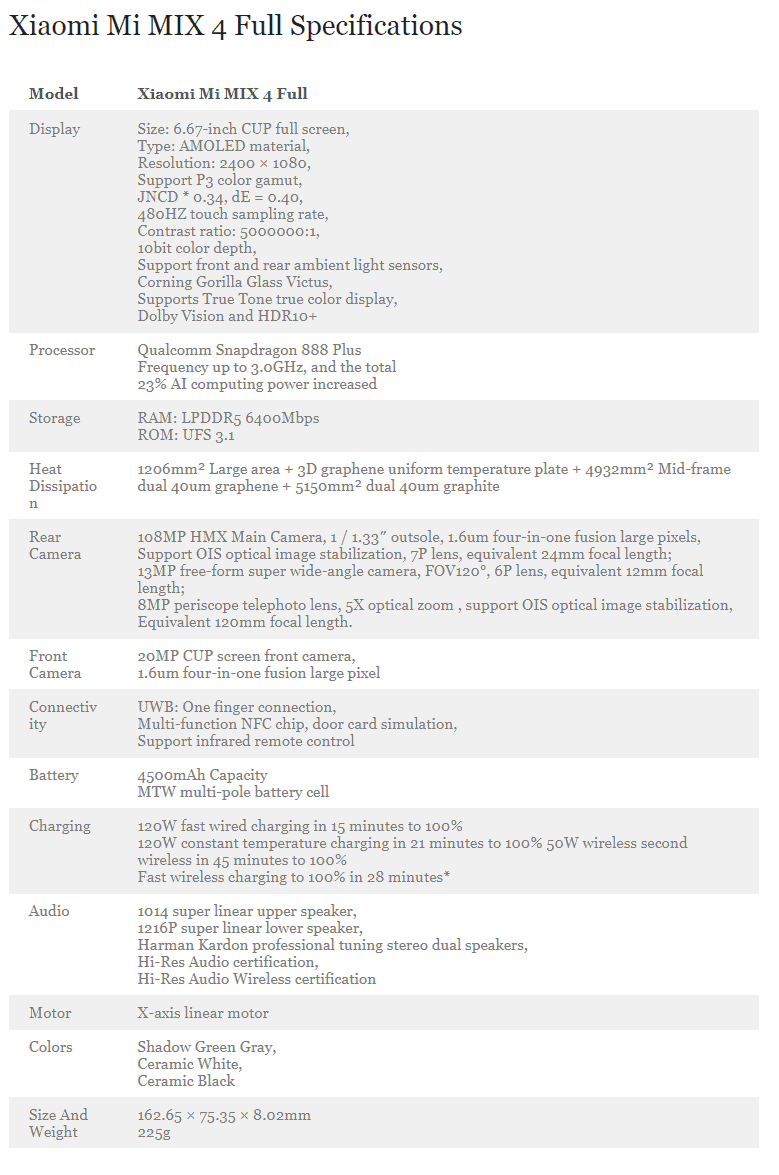 The Chinese company Xiaomi has recently released videos showing the front of the Mi MIX 4 smartphone; the official presentation of which will take place tomorrow – August 10th. So, as you can see in the image above, the device has a display with narrow bezels. The screen has no notch or hole for the front camera. The selfie module is located directly behind the display. Earlier we talked about using a 32-megapixel sensor.

Next Samsung is preparing to release the affordable Galaxy A03s