Google and Facebook jointly announced that they would participate in the development of a new undersea cable system in 2024 to improve Internet connectivity in the Asia-Pacific region.

Facebook said that this infrastructure project called “Apricot” will connect Japan, Singapore, Taiwan, Guam, the Philippines and Indonesia to help meet people’s growing demand for broadband access and 5G wireless connections. In March of this year, the company announced two trans-Pacific undersea cables Bifrost and Echo. They connect Singapore and the west coast of the United States. Google participated in the construction of the latter.

In its turn, Google stated in a blog post that Echo and Apricot are two complementary undersea systems that will increase the flexibility of Google Cloud and other digital services of the company. The initial design capacity of this new optical link across the Asia-Pacific region exceeds 190 megabits per second.

At present, the two Silicon Valley giants are investing in the construction of Internet infrastructure in areas where they believe the greatest potential for growth. Google also announced a $10 billion investment plan last year. The latter ought to help India advance its digitalization process in the next 5 to 7 years.

Africa Will Have Internet As Well

Apart from this, we learned that Facebook is building a massive undersea cable around Africa. Once completed, it will be able to bring more of the continent’s 1.3 billion inhabitants online.

As you understand, such big projects are not implemented solely. Facebook partners with carries such as China Mobile, South Africa’s MTN, France’s Orange and Britain’s Vodafone as well as local network operators on the project, dubbed 2Africa.

“2Africa is a continuation of our ongoing efforts to expand global network infrastructure,” Facebook said. “We have collaborated with partners all over the world to build several subsea fiber-optic cables that are leading the industry in terms of reach, capacity, and flexibility.” 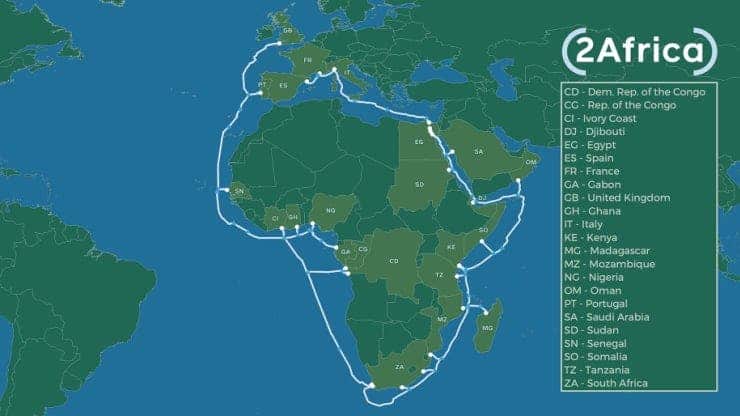 Moreover, Facebook is one of the initiators and investors. Nokia-owned cable systems provider Alcatel Submarine Networks is responsible for the job. The new underwater cable system will be 37,000 kilometers in length. As Facebook claims, the cable will be “nearly equal to the circumference of the Earth.”

None of the parties has disclosed any investment details. But we know that these undersea cables will interconnect 23 countries in Africa, the Middle East and Europe. Facebook states it will “provide nearly three times the total network capacity of all the subsea cables serving Africa today.”

Next Samsung's Next Exynos Chips Will Be Designed By Artificial Intelligence