Back in 2010, there were many rumors claiming that Apple was going to launch a petit iPhone dubbed the iPhone Nano. Today, The Verge showcased an email from Steve Jobs, as part of evidence of Apple’s ongoing legal battle with Epic Games. The email confirms that the Cupertino company had internal plans of working on an “iPhone nano.”

The email was sent by Steve Jobs to fellow executives in October of 2010. It has a few different business plans for 2011. Say, in the email, Jobs wants Apple to find its identity, its best selling points, and Apple’s “Holy War with Google.” 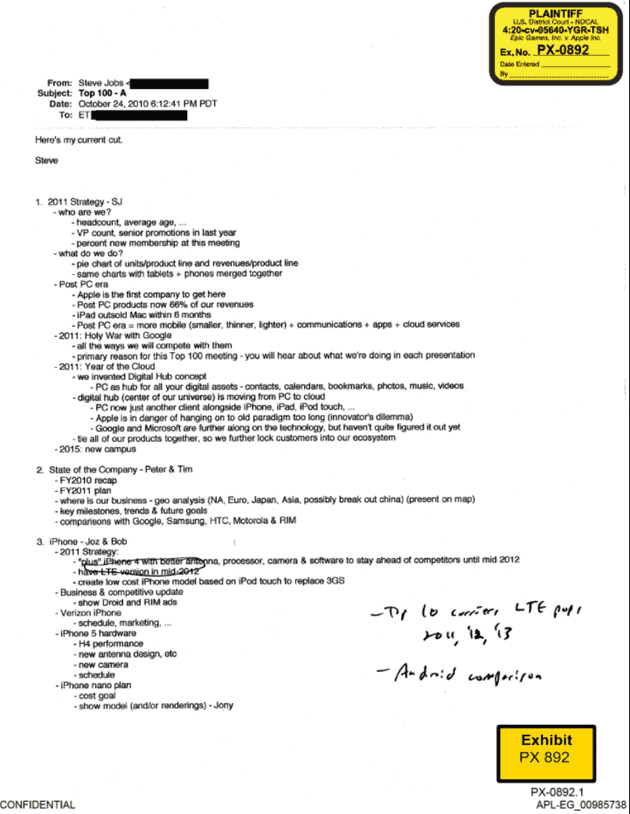 In the email, we can also see a section labeled “‌iPhone‌ – Joz & Bob.” It refers to current Apple executive Greg Joswiak and former Apple executive Bob Mansfield. Job says that Apple ought to release a “Plus” version of the ‌iPhone‌ 4. It must come with improved antennas, improved performance, camera, and software. And as you remember, the follow-up model namely iPhone 4S really came with the mentioned improvements. As a result, it became one of the best-selling iPhones in the company’s history.

However, we guess the most interesting part of the email is the last part. There Jobs talks about the “‌iPhone‌ Nano plan”. As you can assume, the main goal of this handset is the low price.

Unfortunately, Jobs’ October 2010 email, which is an agenda for a strategy meeting, doesn’t reveal much about the device. There’s a bullet for an “iPhone nano plan,” a sub-bullet for its “cost goal,” and another sub-bullet indicating that “Jony,” presumably Apple’s former design chief Jony Ive, would “show model (and/or renderings).” A “2011 Strategy” bullet earlier in the agenda has a sub-bullet that says “create low cost iPhone model based on iPod touch to replace 3GS,” but it’s unclear if that is referring to the iPhone nano or a different device entirely.

Anyway, in this email, he is also talking about his plans of creating a “low-cost ‌iPhone‌ model based on iPod touch to replace 3GS”.

iPhone Nano Has Never Been Released But Strategy Changed

Apple began making different-sized iPhones starting from 2014. At that time, the Cupertino-based company introduced the ‌iPhone‌ 6 Plus along the vanilla version. This was also the first time when Apple added the Plus suffix to its iPhone’s naming. Since then, the company has drastically altered its ‌iPhone‌ strategy, offering a wide range of ‌iPhone‌ sizes. With this, it targets various customers groups and generates more sales.