Xiaomi will be hosting its Smarter Living 2022 in India on August 26 at 12 PM (IST), where the company will announce six new products. The tech behemoth will be unveiling a slew of hotly-anticipated devices including the Mi Band 6, new Mi Notebook, Mi TV 5X, along with an all security camera, shoes, and a router. The Mi Notebook will be a premium laptop sporting a backlit keyboard and housed in an all-metallic body.

As mentioned earlier, the tech giant could take the wraps off the much-awaited Mi Band 5 successor dubbed, the Mi Band 6 during the event. The fitness tracker is currently available in the company’s home country of China. The Mi Band 6 will be water-resistant with a touch-supported display. It will sport an AMOLED panel and offer a battery life of 14 days. Aside from that, a new Mi TV 5X teaser has hinted at its impending launch. It will support Dolby Atmos sound and 40W stereo speakers.

The event kicks off at 12 PM (IST) today. You can watch the telecast live on Xiaomi’s social media platforms including Facebook, Twitter, and YouTube channels. You can watch the virtual conference from the video below. As mentioned earlier, the event will see the launch of six hotly-anticipated products. These products have been floating around the rumor mill for a long time. Finally, their launch today will reveal their specs and other details.

The new Mi Notebook will reportedly feature a backlit keyboard. Furthermore, it will sport an eye-catching aerospace-grade Series 6 Aluminium Alloy design. The company could launch two new notebooks including the Mi Notebook Pro 15 (2021) and the Mi Notebook Ultra during the event. The Notebook Pro 15 was launched in China on March 15. The device packs 11th-generation Intel Core processors, Nvidia GeForce graphics, and sports a 120Hz OLED display.

The Xiaomi Mi TV 5X has been confirmed to launch in India during the Xiaomi Smarter Living 2022 today. On August 20, Xiaomi India confirmed the launch of the Mi TV 4X successor via a tweet. The Mi TV 5X will sport metal finish bezels and support Dolby Vision. Furthermore, it will have Dolby Atmos-backed 40watt stereo speakers. Moreover, it will support Google Assistant. 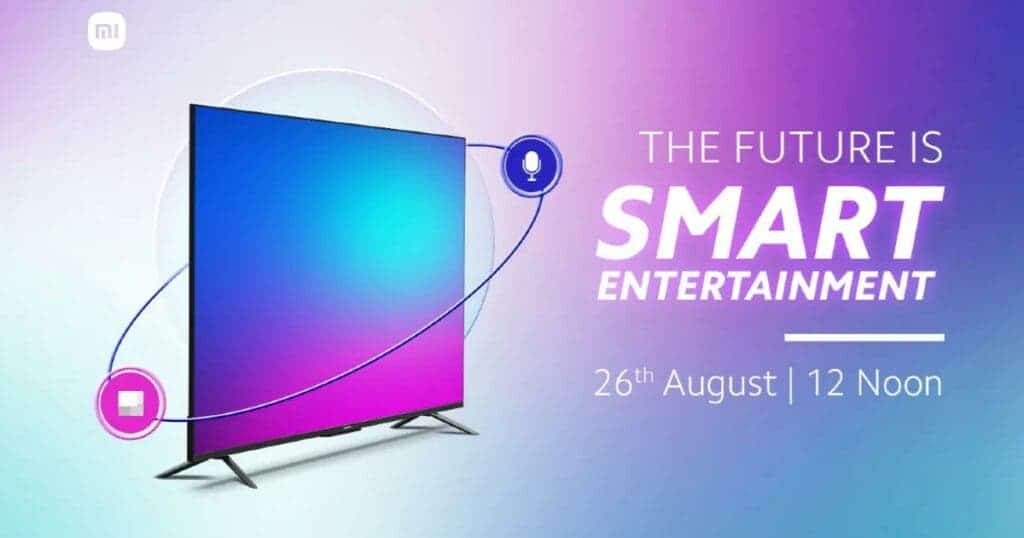 The Mi Band 6 could sport a 1.56-inch AMOLED screen with a screen resolution of 152×486 pixels. Furthermore, it will be water-resistant and feature a new touch-supported display. On top of that, the fitness tracker will monitor real-time heart-rate and offer a myriad of fitness modes. The Mi Band 6 regular model retails for CNY 229 in China, and the NFC variant is available for CNY 279 in the country, according to a TimesofIndia report.

In addition to the aforesaid device, Xiaomi has suggested that it will unveil a slew of other equally interesting products. These include an AI-powered security camera, shoes, and a newfangled Mi router. Although details about these three devices are still scarce, more pieces of information are likely to be revealed today during the Smarter Living 2022 event in India.