Samsung is gearing up to reveal a new mid-range contender in India with 5G connectivity. The device in question will be the Samsung Galaxy M52 5G and it is expected to hit the Asian country on September 28. The new mid-range contender will be a solid option for those who want 5G but do not want to pay too much for a phone. The device has a 120 Hz display and a triple camera setup at the back. Without further ado, let’s see what this device is preparing for the market.

The new Samsung Galaxy M52 5G comes as a mid-range option, but that delivers in performance. For instance, it packs the excellent and recently released Qualcomm Snapdragon 778G SoC. It’s impressive to see how fast this chipset is entering the mid-range market. Perhaps, Qualcomm is easing things in light of MediaTek’s success with its affordable Dimensity lineup. In addition to the octa-core platform, the device will have up to 8 GB of RAM and 128 GB of Internal Storage. Worth noting that you can expand it up to 1 TB with a micro SD card.

The Samsung Galaxy M52 5G flaunts a 6.7-inch Full HD+ AMOLED display with a 2,400 x 1,080 pixels resolution. The display also has a centered punch-hole and a 120 Hz refresh rate. The device also has a Corning Gorilla Glass 5 protection to keep it safe from scratches. The punch-hole serves as a home for the 32 MP selfie snapper. 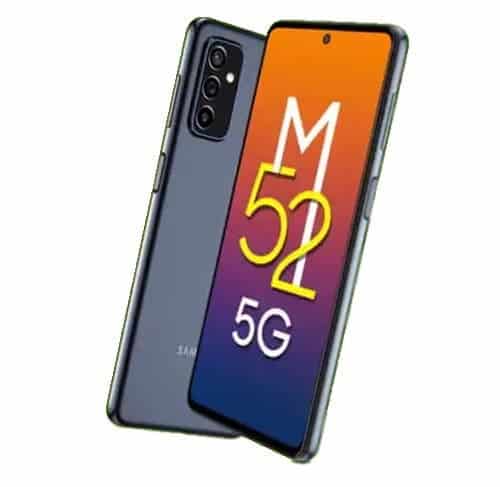 Moving around to the back, the Samsung Galaxy M52 5G has a triple-camera setup sitting in a rectangular module. It comes with a primary 64 MP camera, alongside a 12 MP ultrawide camera, and finally, we have a 5 MP depth sensor. The Galaxy M52 will run Android 11-based on the latest One UI 3.1. We expect it to draw its powers from a 5,000 mAh battery, however, we don’t expect anything beyond 25 W in terms of fast charging. Other features a 5G, 4G with VoLTE, dual-band Wi-Fi, Bluetooth 5.1, GPS, 3.5 mm headphone jack, and USB-C port

We expect more teasers to be revealed by Samsung to build anticipation for September 28 reveal.