With the release of iOS 15 last Monday, the analysis and comparisons by insiders begin to try to understand how Apple users have welcomed the new version of the operating system. Well, the first data are not exactly comforting, because only 9.28% of iPhone owners have already updated, a much lower value than the 14.5% recorded last year with iOS 14.

These percentages were provided by Mixpanel, which obviously only estimates the values ​​based on the visits to all the websites and apps that integrate its data analysis tools. Nothing official, therefore; but it is still an indication that can take on particular interest (and value); when these data are compared from year to year.

The communication from Apple that it wants to continue updating iOS 14 in parallel have affected the poor adoption of iOS 15. It is the first time that the Cupertino company decides to support two versions of its OS at the same time. We do not know how long this period of double updates will last, the fact is that users probably do not feel the need to update with the same importance of previous years also for this reason. 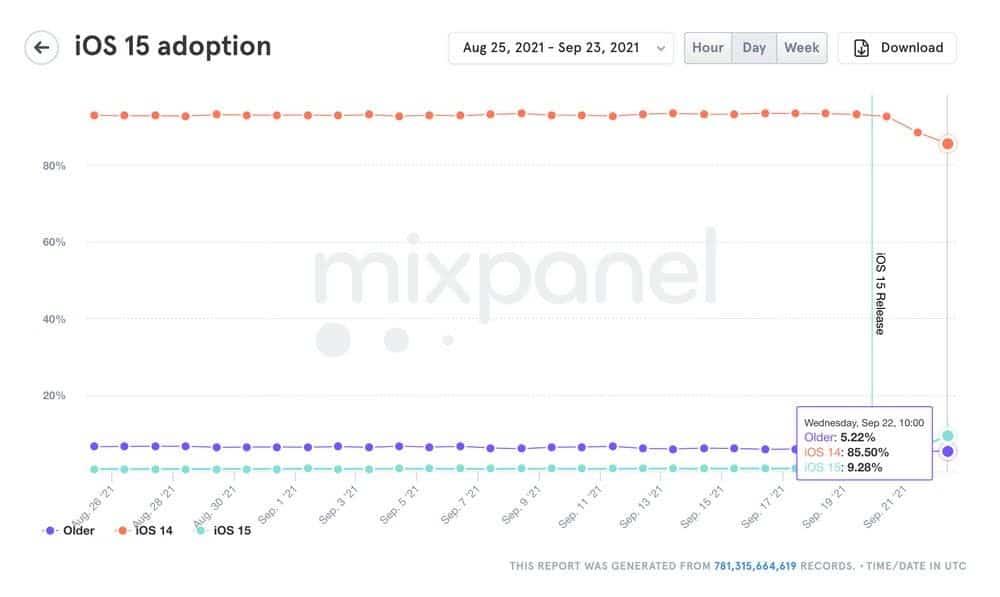 As expected, Apple has begun rolling out iOS 15, a new version of its mobile software platform, which will soon be available to owners of all compatible smartphones from the company, starting with the iPhone 6S released in 2015. The update brings with it a number of interesting innovations; including the ability to use FaceTime to make calls to Android and Windows devices, improved photo-processing algorithms, and much more.

One of the most notable innovations comes from FaceTime; Apple’s proprietary video chat application, which previously only allowed users of Apple devices to chat. With the release of iOS 15, the situation changed and FaceTime gained support; for making calls to Android and Windows devices. To use this option, you will need to generate a link to the chat in FaceTime; which you can send to anyone in any way possible. By clicking on such a link, the user will automatically join the conversation. It is possible to join the chat only after the administrator’s approval; so that when conducting virtual conversations, the appearance of random people is excluded.

Another change concerns the iMessage app. From now on, links users receive during the day will get automatic transfer to other applications; so that the user can familiarize themselves with them. For example, when someone sends you a link to a news item in Apple News; it will move to the company’s news service. In a similar way, the links coming to iMessage related to Apple Music, Apple Photos; and other branded services will be distributed.