Apple Watch Series 7 real-world images have surfaced online even before the Cupertino-based tech company officially unveil its new wearable. Apple took the wraps off the Apple Watch 7 Series at the same launch event, where the company announced the new iPads and the iPhone 13 series. However, the tech behemoth remained tight-lipped about the availability of the Apple Watch.

Apple revealed the exact pre-orders dates for all of the other products that were announced. However, it simply stated that the Apple Watch will hit the store shelves sometime in the fall. This uncertainty can be attributed to production issues that surfaced ahead of its launch. Now, some real-world pictures seem to have past Apple restrictions and are making the rounds online.

The pre-orders are on the verge of opening. However, what seems to be the first real-world images of the Apple Watch 7 Series have been spotted on Facebook. The images were originally discovered by MacRumors in an Apple Watch enthusiasts group on the popular social media platform. To recall, the only images of the Apple Watch 7 Series that have surfaced online have been revealed in marketing materials or in the form of press renders. 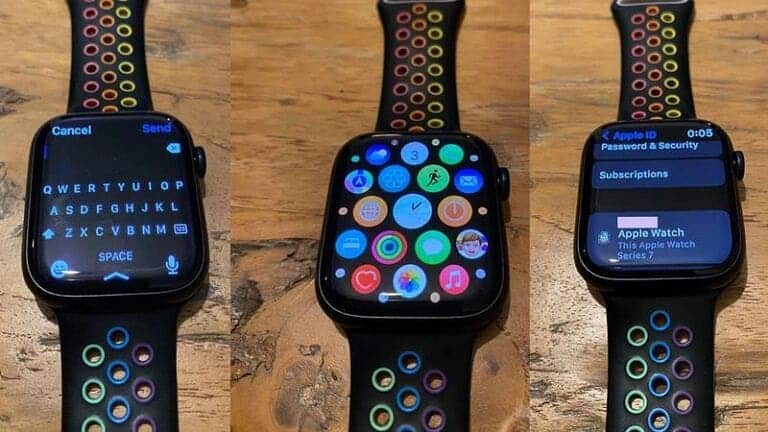 Also, details about the exact date for pre-orders are still scarce. However, multiple reports suggest that it is just around the corner. The aforesaid images give us a glimpse of the new wearable. It shows a larger display and rounded corners. The original poster of the images claims that they were testing the Apple Watch Series 7 before they go up for grabs later this fall. Aside from that, the poster claim that they work with a carrier.

What Else to Expect?

The Apple Watch Series 7 draws its juices from a robust battery that delivers 18 hours of battery life on just a single charge. It comes with a new Magnetic Fast Charger USB-Type C Cable and charging architecture that offers a significant 33 faster charging. On top of that, it offers multiple connectivity options such as dual-band Wi-Fi, Bluetooth, and GPS. Furthermore, the smartwatch comes running watchOS 8 out of the box, which boasts an impressive array of new software features.

The Apple Watch Series 7 will be carrying a starting price of $399. Moreover, you can choose from several different finishes. The aluminum variant will be available in five eye-catching color options. Likewise, the stainless steel variant comes in three highly appealing color options. Aside from that, the titanium model will be available in two colorways. As if that weren’t enough, the Apple Watch Series 7 is even backward compatible with previously launched Apple Watch bands.