Realme GT Neo2 is slated to hit the store shelves in India soon, but details about the smartphone’s price in the country have been revealed. We are just a few days away from the Realme launch event, where the company will be unveiling the GT Neo2. The company launched the handset in China in September. So, the phone’s outward appearance and specifications have already been revealed.

In India, the Realme GT Neo2 will be succeeding the Realme X7 Max, which is a rebranded version of the Realme GT Neo. However, Realme will be retaining the same GT moniker this time around. Earlier this month, the GT Neo2 arrived on Google Play Console with key details. Moreover, the handset has been subject to multiple leaks and speculations, especially surrounding the price tag it will carry in India. Now, 91mobiles has divulged the phone’s expected price and other details.

A dedicated microsite has gone live on the official Realme website, confirming that the Realme GT Neo2 will launch in India on October 13 at 12:30 PM IST. You will be able to watch the live stream of the launch event through the company’s official YouTube channel and Facebook page. Moreover, the microsite reveals some key specifications of the much-awaited smartphone. However, the company kept its pricing details under wraps.

To recall, the base model of the Realme GT Neo2 retails for INR 28,500 in China. According to 91mobiles, the phone could carry a price tag of INR 30,000 or even higher in India, since the GTS rate will be added. Furthermore, the Realme GT Neo3 is could compete with the likes of the Mi 11X and OnePlus 9R.

According to the dedicated microsite, the Realme GT Neo2 will pack a Snapdragon 870 SoC under the hood. Aside from that, the phone will come with a competent Adreno 650 GPU. For optics, the device houses three rear-mounted cameras. This includes a 64MP main camera, an 8MP ultra-wide-angle camera (120-degree FoV), and a 2MP depth sensor that captures portrait shots. The phone runs Android 11 OS with Realme UI 2.0 custom skin on top. 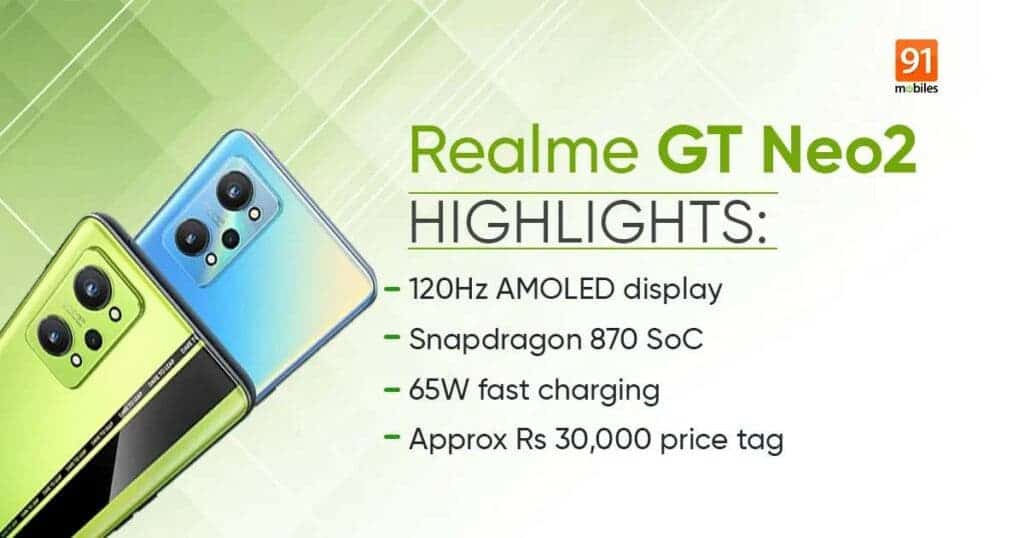 The word on the street is that it will come running the latest Android 12 OS with Realme UI 3.0 atop. In terms of connectivity, the Realme GT Neo2 offers a USB Type-C port, GPS, Bluetooth 5.1, Wi-Fi 6, 4G LTE, and 5G. Furthermore, the phone sports a 6.62-inch E4 AMOLED display with FHD+ resolution, and a 120Hz refresh rate. The screen delivers a brightness of 1300nits and an impressive 600Hz touch sampling rate. It has Gorilla Glass 5 protection on top for additional protection.

Furthermore, the phone draws its juices from a 5000mAh battery that supports 65W fast charging. Upfront, the phone houses a 16MP selfie camera. On top of that, the phone comes with an in-display fingerprint sensor. Other notable features include Hi-Res audio, Dolby Atmos, and stereo speakers. The phone’s dimensions are 162.9×75.8×8.6mm and it weighs 199.8 grams.