Back in March, a group of researchers prepared a report for internal use on Facebook. Recent research has shown that the company’s services have been losing popularity among teenagers for years.

It turned out that the time spent by US teenagers in the Facebook ecosystem decreased by 16% compared to last year, older people also began to spend 5% less time on the social network. Moreover, the number of new adolescents registering online is decreasing. It also became known that until 2000, US residents created an account on the network, being between the ages of 19 and 20. According to modern data, the inclusion of people on the social network Facebook occurs much later, at 24 years old or 25 years old, if at all.

An analysis of the internal collection of documents showed that young people spend less time on the social network, fewer and fewer people want to create a Facebook account among the younger generation, many of the new teenage accounts are duplicates created by existing users, and the users themselves generate fewer posts. At the same time, researchers cannot give an exact answer why the popularity of services is falling and how the existing trend can be overcome.

According to Facebook spokesman Joe Osborne, the company’s products are still widely used by teens, but there has long been an increase in competition from services like Snapchat and TikTok. 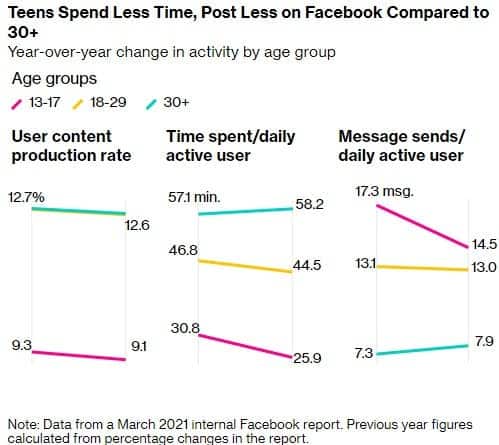 Facebook has been losing popularity among American teens since at least the beginning of 2016. To create products with a focus on youth, the so-called. Teens Team, engaged in the development of new solutions. However, according to Michael Sayman, who has been on the team since the age of 18; “the whole company was trying to understand the generation that it was not a part of.”

Despite such attempts, statistics show that teenagers use their accounts less and less actively. The study mentions that the company does not give young people a compelling reason to join their social networks. In a recent study on the use of the social networking site by young people; Facebook ranked first in only one category; “Getting information about local events and communicating with people in the area”.

It also turned out that adolescents themselves can hinder the increase in the number of users. According to the company, they strongly influence the Internet preferences of their younger siblings; who copy their behavior patterns, for example, what and how often to post on Instagram. With a loss of interest in Facebook, teens can deprive the next generation of interest in it.

We know that in August, TikTok bypassed Facebook in comparison with the results for the same period last year; it became the most downloaded social media application.