They were able to figure out that the Xiaomi 12 Lite will appear in two versions: for the Chinese market and for the global market. Moreover, the Chinese version will be better than its international counterpart in terms of cameras. The home market version has the codename “ZIJIN” and the global version “TAOYAO”.

Xiaomi 12 Lite in both versions should receive a display with a refresh rate of 120 Hz with a resolution of 2400×1080 pixels and a Qualcomm SM7325 chip. Presumably, the hardware platform is the Snapdragon 778G Plus, which was introduced two days ago and became the overclocked version of the Snapdragon 778G. 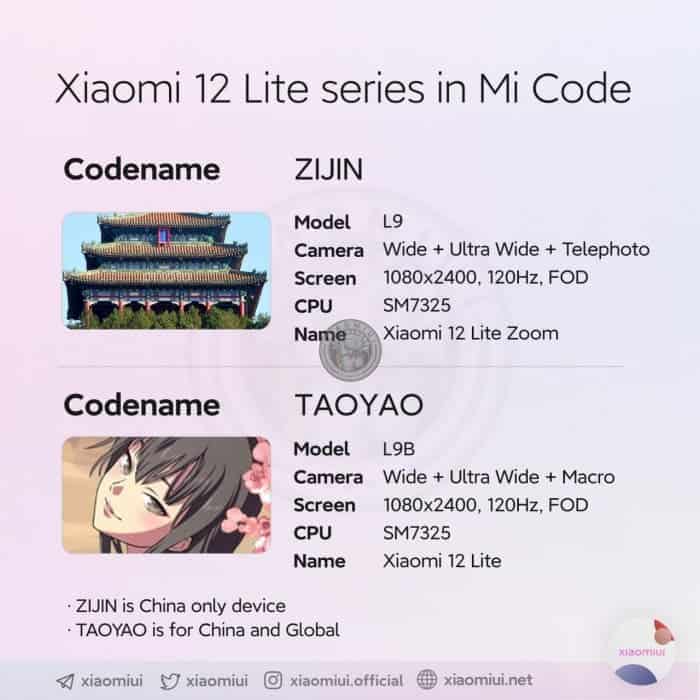 At the very end of last year, the flagship smartphone Xiaomi Mi 11 was presented; which became the first device based on the flagship Qualcomm Snapdragon 888 chipset. Xiaomi should soon present its successor. A new post from the reputable tech blog Digital Chat Station reveals some details about the design of the upcoming flagship of the Chinese company.

Digital Chat Station claims that the new product will receive noticeably narrower bezels around the display than its predecessor. According to reports, Xiaomi 12 will not have a chin and will arrive with full-screen design. We assume that the bezels on all four sides of the display will be of the same small thickness. In addition, the size of the cutout for the front camera in the screen will be smaller. By combining these factors, Xiaomi will deliver an incredibly high screen-to-bezel ratio for your smartphone.

Digital Chat Station also note that the device’s screen will have curvature at the edges; but this bend will not be as sharp, and the display will not go as far to the side edge; as in previous flagships of the company. Unfortunately, it is not specified which model of the flagship device the insider is talking about. The basic Xiaomi 12 or the more advanced Xiaomi 12 Pro.

The launch date of the flagship smartphones of the Xiaomi 12 series has not yet been disclosed; but it is assumed that the premium devices of the Chinese tech giant will be among the first to offer users access to the upcoming flagship platform Qualcomm.

The presentation of the Xiaomi 12 Lite is not far off