As usual, IDC published the latest reports for the global tablet shipments and the global smartphone shipments in the third quarter. According to the data coming our way from the market research company, the tablet sales reached 42.3 million units, a year-on-year decrease of 9.4%. However, Apple’s iPad is still achieving shipment growth in the shrinking market. 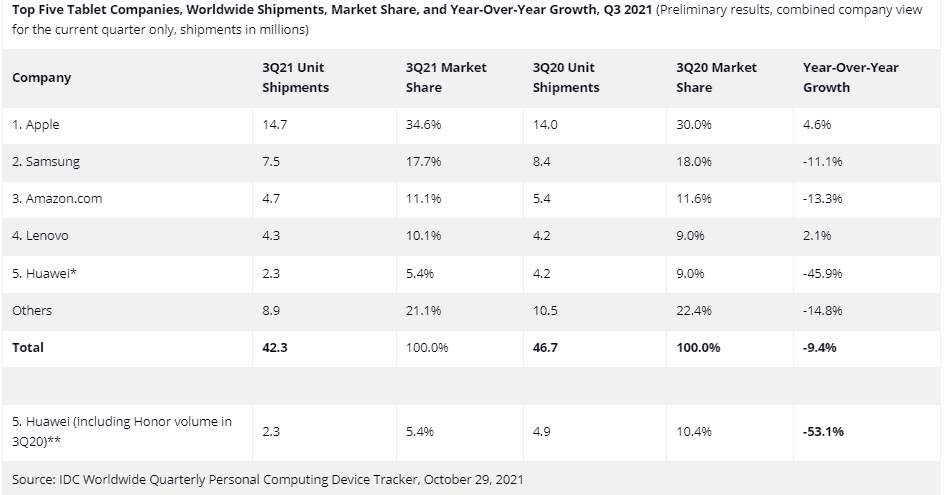 Apple is in the leading position in the tablet market with a large advantage; Samsung ranked second with a 17.7% market share; Amazon ranked third with an 11.1% market share. By the way, tablet shipments of Samsung and Amazon dropped by 11.1% and 13.3% year-on-year, respectively.

“Many schools and governments blew out their budgets to provide devices for remote learning and even consumers aggressively purchased devices for learning in 2020. As a result, some saturation in the education market is expected in the near term,” said Anuroopa Nataraj, senior research analyst with IDC’s Mobility and Consumer Device Trackers. “This directly impacts Chromebooks and even tablets to some extent”. Especially, it’s noticeable in developed markets such as the U.S. and Western Europe. However, Chromebooks continue to increase their footprint in emerging markets such as Asia/Pacific (excluding Japan and China), Latin America, and the Middle East & Africa, but sales in these regions account for less than 13% of the overall Chromebook volume and hence are far from moving the global market.”

Apple seems to be relatively unaffected by the decline in tablet sales. But IDC pointed out that the relaxation of the new coronavirus epidemic ban around the world has led to increased spending in other categories. The latter seems to weaken the demand for tablets and Chromebooks.

However, Apple expects that due to continued supply chain constraints, iPad shipments will not increase in the fourth quarter.

In the third quarter of 2021, global smartphone shipments were 330 million units, a year-on-year decrease of 6.7%.

In the third quarter of 2021, Central and Eastern Europe (CEE) and the Asia-Pacific region (excluding China and Japan) saw the largest declines, at -23.2% and -11.6%, respectively. Regions such as the United States, Western Europe, and China have a much smaller decline. They are -0.2%, -4.6%, and -4.4%, respectively. That’s because the top manufacturers gave higher priority to these regions.

Next Realme To Enter High-end Smartphone Market Early Next Year