It’s no secret that Samsung is developing a SoC in collaboration with AMD. In a sign of its own failure to create powerful graphics for a mobile chip, the company called for help from those who could do it. In early summer, AMD CEO Lisa Su confirmed the collaboration and promised that we would find out more details by the end of the year.

It looks like the expectations of the new platform are coming to an end. Clarity may come within 10 days. Today, the company posted a post on its Instagram account saying that “With gaming graphics continuing to evolve, let’s show you what entertainment will look like in the future,” read an excerpt from a teaser posted on the Samsung Exynos Instagram account. The teaser further claims that “everything changes on November 19, 2021.”

It looks like the company is hinting at the announcement of a new Exynos 2200 chip that will offer AMD graphics and support for ray tracing technology for realism. The Exynos 2200 will run using the Armv9 architecture and will offer eight cores ranging from powerful to energy efficient: Cortex-X2, Cortex-A710 and Cortex-A510. The processor should use 4-nanometer technology.

But still, we leave a chance that Samsung cheated a little and decided to play on a high degree of expectation for the Exynos 2200. There is a possibility that it will limit itself to the announcement of the Exynos 1250 chip, which is a 5nm chipset for affordable devices.

There is just over a week of waiting left, and we will know exactly what kind of surprise Samsung has actually prepared. We are betting whether the Exynos 2200 will launch on November 19 or not. 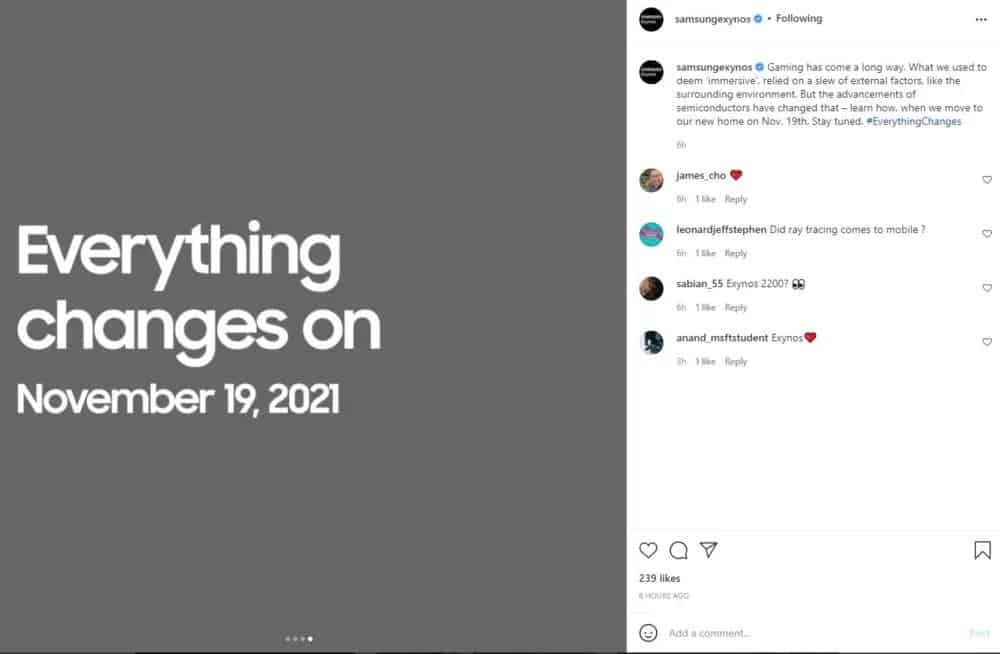 Samsung’s semiconductor division will double shipments of Exynos processors next year, according to ETNews. It is believed that currently about 20% of Samsung Galaxy smartphones are based on Exynos chips.

Now that the company has adopted Arm’s original computing cores rather than its own custom ones; the performance of both flagship and mid-range Exynos models has improved markedly; and will probably get even better in the next generations. Insiders say 5G and heat issues will also be addressed in the very near future.

Previous BioNTech shares are up by double digits after a setback

Next Xiaomi is testing a clamshell foldable-screen smartphone