Earlier this year, the local brand Lava returned to India with the Z series models. It was a 4G-enabled smartphone that offered various configurations. But this company has higher goals and it is not going to limit itself with “outdated” models. After many months, the manufacturer launched the Lava Agni 5G in India. The latter is a classic mid-range smartphone, which costs less than Rs 20,000 ($270). This model ought to make a tough competition to the models such as the Realme 8 Pro 5G, Redmi Note 10 Pro series, Poco X3 Pro, iQOO Z3 5G, and other handsets that are priced identically. So it’s quite interesting to take look at its features and understand how it’s going to grab its piece of the pie.

As said, the Lava Agni 5G is the manufacturer’s first 5G smartphone. Under the hood, it hosts the MediaTek Dimensity 810 SoC. This 5G processor is accompanied by up to 8GB of RAM and 128GB of native storage. But the latter supports a microSD card expansion.

Also, our protagonist can boast of a 5000mAh battery, which supports 30W fast charging. At the bottom, we can find a USB Type-C port, which ensures faster charging and data transmission. Interestingly, the company also retained the 3.5mm headphone jack. On the rear, we have a quad-camera module, which is inside a rectangular module. The system consists of a 64MP primary camera lens, a 5MP ultrawide lens, and two 2MP sensors for depth and macro shooting. 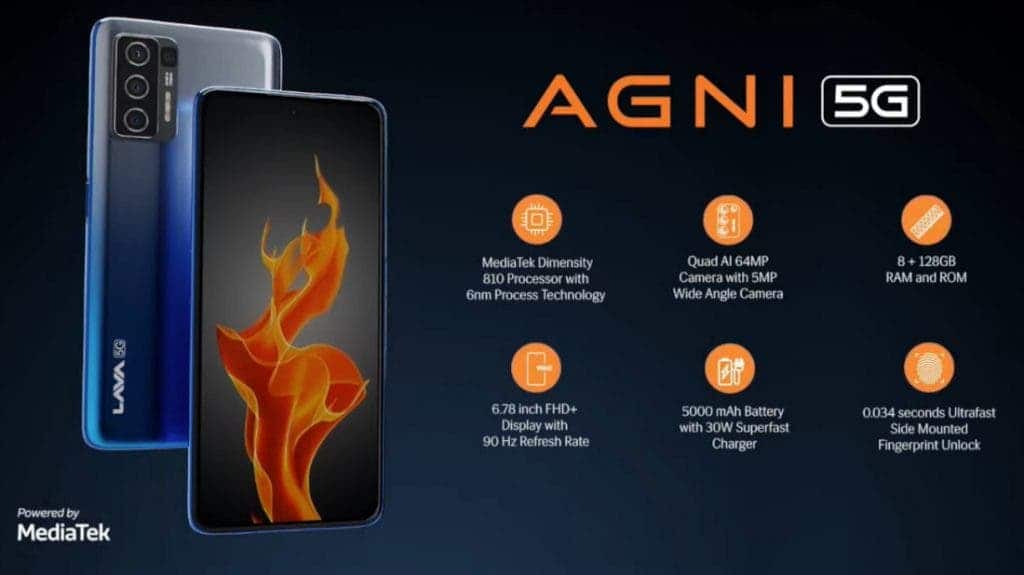 The 6.78-inch Full HD+ IPS LCD screen adopts a hole-punch design. The bangs area houses a 16MP front camera. Also, its screen supports a 90Hz refresh rate. The screen ratio exceeds 91.7%. Because of the LCD screen material, the fingerprint sensor is placed on the side. But it also supports AI Face Unlock.

By the way, many specs do not correspond to the early rumors.

At the moment, there is only one storage variant you can choose from. It combines 8GB of RAM with 128GB of storage. Lava has launched the phone in a sole Blue color. This version costs Rs. 19,999. However, users who pre-order the device till November 17 on Lava E-store will pay 2000 rupees less. Lastly, the phone is planned to go on sale starting November 18 via Flipkart, Amazon, and Lava E-store.