Insiders have published quite detailed information about a new smartphone, which is being prepared for release by the Chinese Oppo: we are talking about the first device of this company on the MediaTek Dimensity 920 platform.

Specs of the first Oppo smartphone based on Dimensity 920 SoC

The named processor is manufactured using 6-nanometer technology. It contains eight processing cores (Arm Cortex-A78 and Arm Cortex-A55) clocked at up to 2.5 GHz, an Arm Mali-G68 MC4 graphics accelerator, and a 5G modem.

So, it is reported that the first Oppo smartphone based on Dimensity 920 will receive a 6.43-inch AMOLED FHD + format with a refresh rate of 90 Hz and a peak brightness of 1300 cd / m 2 . A fingerprint scanner will be located in the screen area.

We do not yet know the commercial name of the smartphone. But we know that it cost from 310 to 360 US dollars, depending on the size of the storage memory. 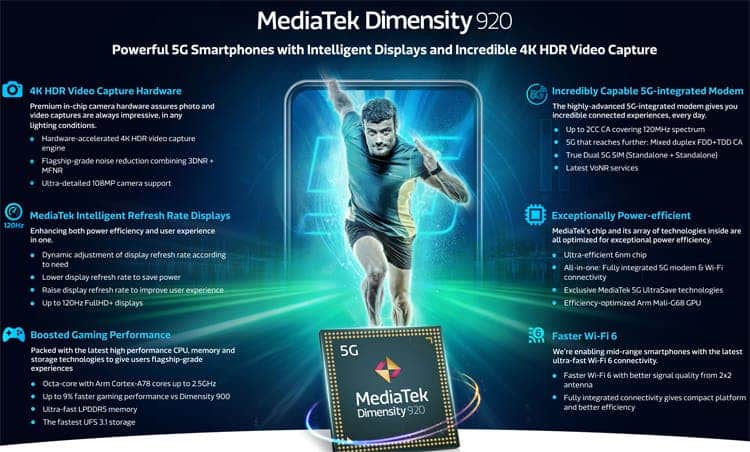 Oppo introduced advanced Reno 7 smartphones, which looks like an iPhone

Oppo hosted a launch event yesterday for the Reno 7 smartphones, most of which leaked online last week. The series includes three devices: the Reno 7 itself, the Reno 7 Pro and the Reno 7 SE. All three devices received a modern design with flat side edges, like the last two generations of iPhones.

Previous Apple to increase its entry-level models: iPhone SE Plus with A15 Bionic is in testing

Next MediaTek mocks Qualcomm: Only one company in the world has a chip heating problem, but not us