Back in the last week, reports emerged about the upcoming Xiaomi 12 series. Despite the lack of official info from the company’s, the rumors said that the brand was preparing an event for December 12 in China. During the event, it would reveal the Xiaomi 12 and Xiaomi 12X flagship smartphones. Now, fresh information points that Xiaomi will launch its flagships by the end of December. Furthermore, the upcoming Xiaomi 12 may not be the first smartphone with Snapdragon 8 Gen1.

Back in the last year, Xiaomi launched it is Xiaomi 11 as the first smartphone with the Snapdragon 888 SoC. The device arrived in December shortly after the Snapdragon Tech Summit event. This year, Qualcomm has chosen November 30 to reveal its upcoming flagship device. Numerous leaks have been pointing to the Xiaomi 12 as the first Snapdragon 8 Gen 1 powered smartphone, but today, a reliable tipster is going against those rumors. 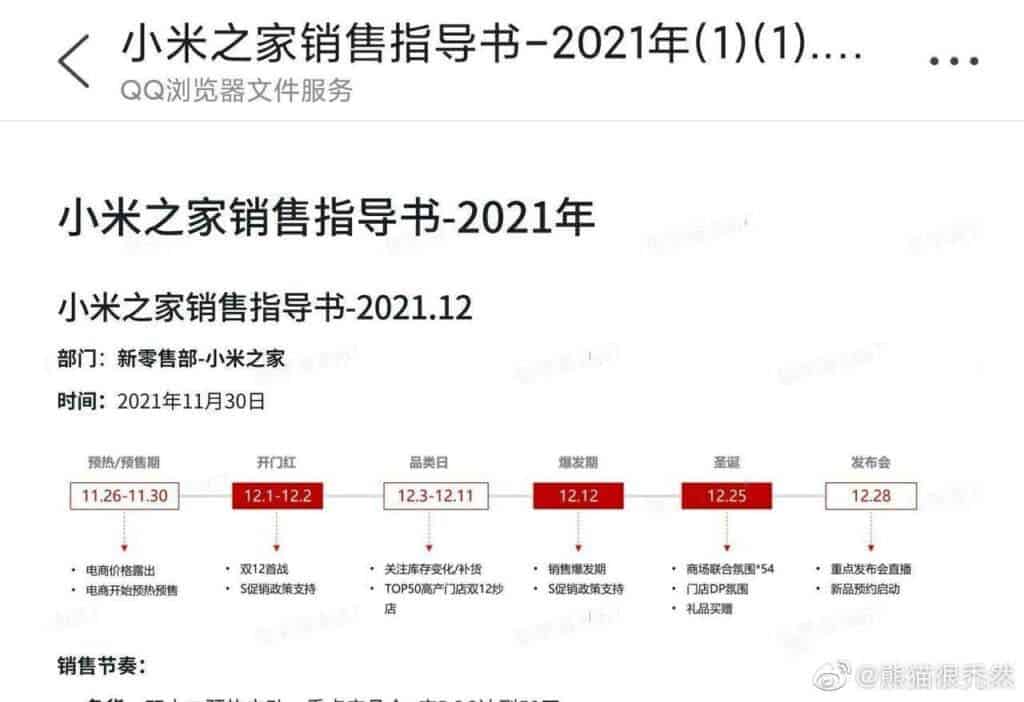 A screenshot of an internal document of Xiaomi China seems to have emerged on Weibo. It shows that the company will be holding a press conference on December 28 to announce a new product. This indicates that the rumored Xiaomi 12 and Xiaomi 12X will go official only on December 28.

Tipster Digital Chat Station has claimed that Xiaomi’s product launch conference is scheduled for the end of the next month. He added that there is a probability that Xiaomi may not be the first brand to launch Snapdragon 8 Gen 1 smartphone. This suggests that the Moto Edge X featuring the Snapdragon 8 Gen1 may go official before the Xiaomi 12 lineup. That would be a remarkable step for Motorola which hasn’t been the more relevant company in the flagship segment.

According to reports, there will be a Xiaomi with the Snapdragon 8 Gen 1 flagship SoC, and the Xiaomi 12X with Snapdragon 870 platform. Both models will come with curved AMOLED displays, Full HD+ resolution, 120 Hz refresh rates, and an in-screen fingerprint scanner. The Xiaomi 12X will be a compact device with a 6.28-inch panel.

Furthermore, the Xiaomi 12X will have a 20 MP selfie snapper. Both models will flaunt 50 MP cameras on the back. The 12X will pack a 5,000 mAh battery with 67 W fast-charging and 33W fast-charging. On the other hand, the Xiaomi 12 will carry support for the 100W rapid charging.

Previous India Told Its Citizens Not to Subscribe To StarLink Services

Next Apple Still Working on a Multi-Device Charger for Its Version of a Wireless Future, According to Report