Not so long ago, the AnTuTu development team published a ranking of the most powerful Android smartphones in the fall in the Chinese market. And now the turn has come to determine the most powerful in the world arena. It is quite predictable that the global rating differs from the Chinese one, because the range of devices outside the Celestial Empire is more modest and a number of interesting devices have not gone beyond China.

The most powerful flagship smartphones

What the Chinese and global rankings have in common is that the entire top 10 flagships were taken by devices based on Snapdragon 888 and Snapdragon 888+. The gaming Nubia Red Magic 6 climbed to the top line with 860,400 points. The second and third places were taken by two more devices aimed at gamers: Asus ROG Phone 5s Pro and ROG Phone 5. 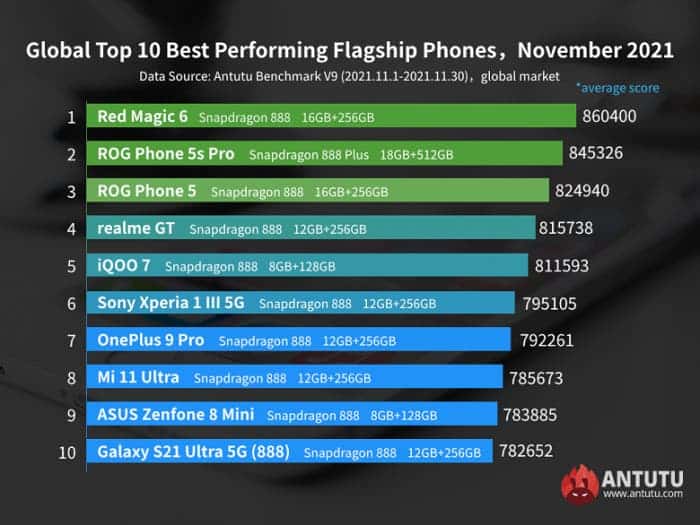 The most powerful mid-range phones

The top ten most powerful in the mid-range segment is a mix, but devices based on Snapdragon 778G dominate. It was this chipset that allowed Realme GT Master to take first place in the ranking; with a score of 537,231 points. It also underlies the Honor 50, Xiaomi Mi 11 Lite 5G NE, Huawei Nova 9, Samsung Galaxy A52 s 5G and Samsung Galaxy M52 5G, which ranked third to seventh.

Xiaomi Mi 11 Lite is the exclusive one in the market to receive the Snapdragon 780G processor; and it is the second in the top 10 most productive ones. The eighth position is occupied by Huawei Nova 7; the ninth was Oppo Reno6 5G and closed the top ten powerful Xiaomi Mi 10T Lite 5G. 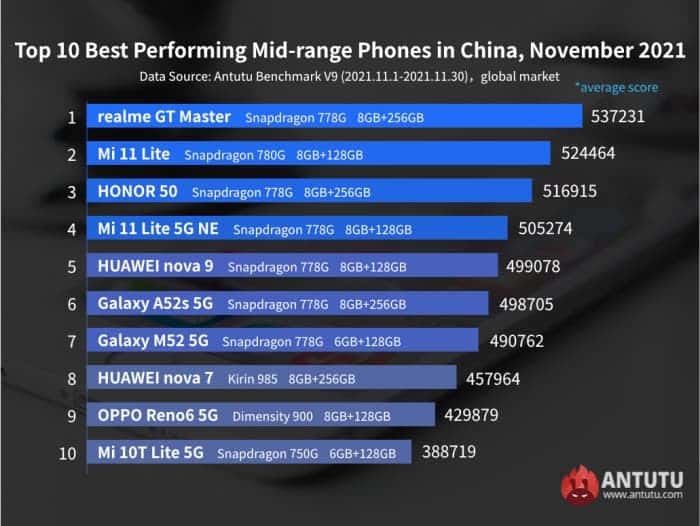 18 of the 20 phones mentioned above are equipped with Qualcomm Snapdragon processors; with Huawei HiSilicon and MediaTek each having only one model, which is undoubtedly a near monopoly. Huawei HiSilicon is limited by the ban and difficult to expand; while MediaTek still has great potential in the 5G chip market. The Dimensity 1200 is having good performance in all aspects, but hard to get a further price increase. However, it is said that the new Dimensity 9000 processor is getting better reviews than the Snapdragon 8 Gen 1; 2022 Might be the key year for Mediatek to expand its share of the market.