Over the past few days, we have seen the official launch of Qualcomm’s and MediaTek’s new flagship processors. The Snapdragon 8 Gen1 and Dimensity 9000 will power 2022 flagship Android smartphones. According to reports, the Redmi K50 series will come with a plethora of processors. This series will have a Snapdragon 870, Snapdragon 8 Gen1, Dimensity 7000, and Dimensity 9000 model. Recently, a new Redmi K50 smartphone got certified in China. However, the official launch of this series will take place sometime in February next year. 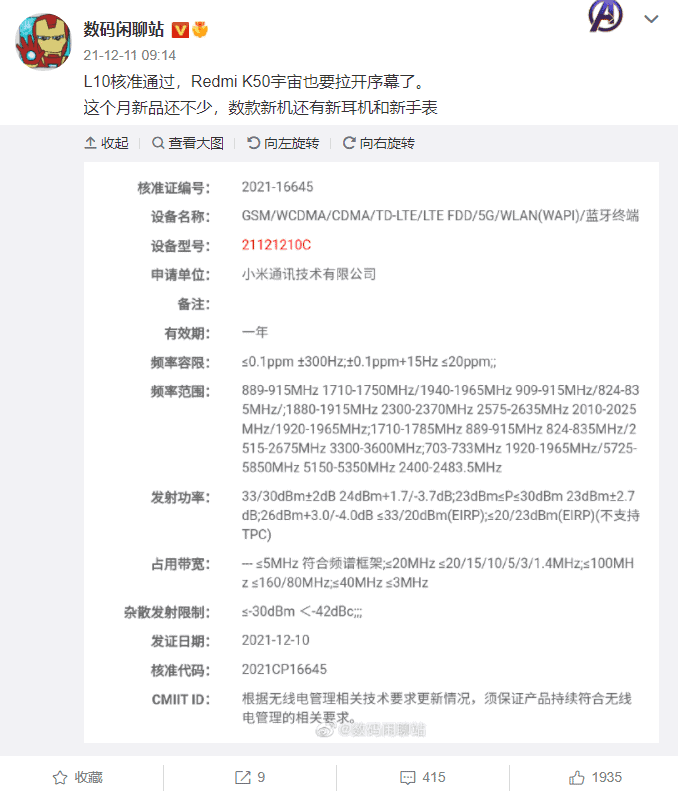 According to popular Weibo tech blogger @DCS, the L10 is certified in China and the Redmi K50 will kick off soon. Xiaomi will release several new products this month including smartphones, earphones, and smartwatches. Furthermore, @WHYLAB stated that the new Redmi K50 series has passed the radio approval and the model number is 21121210C. According to reports, this device is the Enhanced Edition of the series with a MediaTek Dimensity 9000 processor.

Redmi K50 gaming version will have a premium display

The Redmi K50 gaming version with Dimensity 9000should use a 120 Hz or 144 Hz OLED display. It will have a quad rear camera setup including a 64MP Sony Exmor IMX686 sensor as the main camera. There will also be a 13 MP OV13B10 wide-angle sensor as well as VTech’s 8MP OV08856 telephoto macro sensor.  The fourth sensor will be a GalaxyCore’s 2MP GC02M1 depth of field sensor.

In addition, there may be a special version that uses the Samsung ISOCELL HM2 sensor with 108MP resolution.

According to the exposure options, Redmi’s internal planning for new products has five aspects: independent display, LCD, E6 material OLED, adaptive refresh rate technology, and 2K ultra-clear resolution. It is worth noting that the 2K ultra-clear resolution OLED, E6 material, independent display chip, and other specifications are all new configurations that have never been applied by the Redmi brand before. The Redmi K50 will likely be Redmi’s first 2K model and supports higher refresh rate adjustments.

The Redmi K40 comes with a flagship design as well as an E4 OLED high refresh rate display. As the next-generation product, Redmi K50 will continue its previous strategy and continue to use an ultra-high-quality screen.