Realme is one of the leading brands in the smartphone market. The Chinese manufacturer is not strictly a smartphone brand, it makes other devices like the Realme Buds, headsets, and so on. However, Realme is the fastest-growing smartphone brand globally. The company recently announced that it will hold a special launch event on December 20th. According to Realme, this special event will introduce three world’s first innovations on Dec 20th. 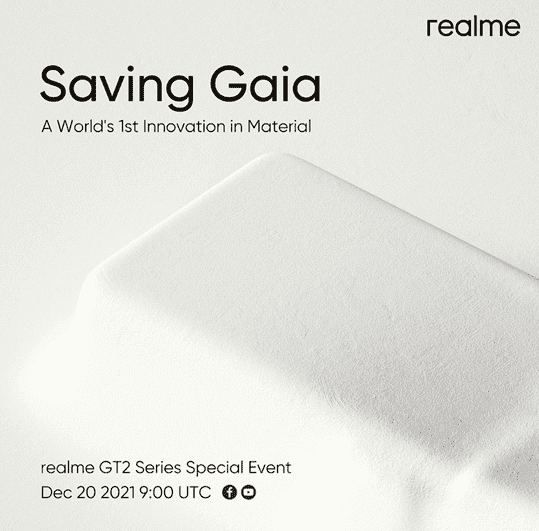 Realme did not reveal the technologies but it gave a hint. The announcement poster comes with the phrase “Saving Gaia – A world-first innovation in material”. Realme has been exploring new materials to improve the appearance and aesthetics of its smartphones. The company will probably introduce an environmentally friendly design using the world’s first innovative bio-based material. This material effectively reduces carbon emissions by up to 63% per kilogram. Furthermore, it is also a strong and durable traditional material.

Realme is the youngest smartphone brand in the top 6 globally and has been expanding rapidly. The company’s cutting-edge technologies and trend-setting designs are more accessible to young customers. This is why it has been doing pretty well in the smartphone market.

No doubt, Realme wants to make a good first impression with its Realme GT 2 series. This is the first flagship smartphone from the company and the device will bring new technologies and innovation. Realme will introduce more than one world’s first technologies in the GT 2 series in this event.

Established by Sky Li in 2018 and driven by its ‘Dare to Leap’ spirit, Realme is the world’s 6th largest smartphone company. As of Q2 2021, Realme has entered 61 markets worldwide, including China, Southeast Asia, South Asia, Europe, Russia, Australia, the Middle East, Africa, and Latin America. The company has a global user base of over 100 million. For more information, please visit www.realme.com.

Next Apple releases an Android app for finding AirTag trackers