Recently, IDC released a third-quarter report for the global wearable shipments. The report pointed out that global shipments for wearables grew 9.9% during the third quarter of 2021. In the mentioned period, it reached 138.4 million units. Thus, it grew by 26.5% compared to last year. Also, now, it accounts for 64.7% of wearable device shipments. As for hearables, they captured 34.7% of the market.

During the last two years, demand for health and fitness trackers increased significantly. But manufacturers that focus on this type of product faced myriads of challenges. As you understand, we are talking about the shortage of various components.

Anyway, as for the top players, Xiaomi was dethroned by Apple and Huawei in the third quarter.

“Demand has been slowly shifting away from wristbands towards watches as consumers increasingly want a more capable device and as the gap in pricing narrows,” said Jitesh Ubrani, research manager for IDC Mobility and Consumer Device Trackers. “The number of watches sold for under $100 is now equal to wristbands, which have dominated this price band in the past. Growth amongst Indian and Chinese brands has been leading the low-end watch space while Apple, Huawei, and Samsung maintain a hold at the high-end.” 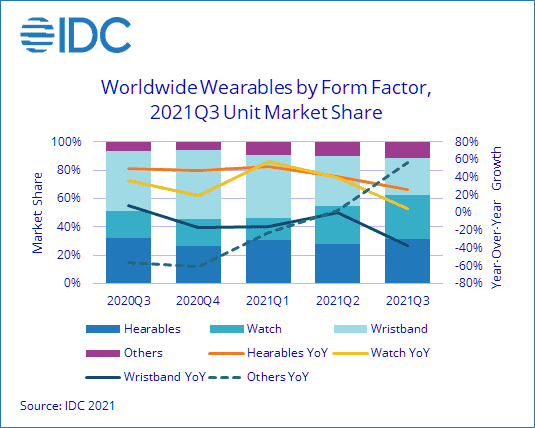 “While the entire wrist-worn wearable market declined year over year, the market for watches actually grew 4.3%,” said Ramon T. Llamas, research director for IDC’s Wearables Team. “And even as smartwatches (devices capable of running third-party applications) have been very popular, it’s the other watches – including kids’ watches, exercise watches, hybrid watches, and others – that drove the market. That’s not to say that smartwatches are losing steam; on the contrary, Apple’s late release of the Watch Series 7 and WearOS relaunching itself among its many hardware vendors will soon generate renewed interest.”

Though the Cupertino-based company has had a 35.3% decline in Apple Watch shipments, it could appear in the toppest position. Due to strong sales of AirPods and Beats, the company was able to win the race.

Samsung and Xiaomi took second and third places. Not only the Samsung Galaxy Watch 4 series wearables but also other products from this category perform well. As for Xiaomi, its shipments fell 23.8% during the quarter. But there is a serious reason behind this – it is transforming from smartbands to smartwatches.

Huawei could reach such heights due to its hearables that are now compatible with multiple brands. So this helped the company to achieve growth in an environment where it faces political difficulties.

Surprisingly, the Indian BoAt could enter the top 5 due to its effective marketing.

Next Honor Magic Fold will pack the Snapdragon 8 Gen 1