Today, Lei Jun, the founder of Xiaomi, chairman, and CEO of Xiaomi Group, released a couple of teasers of the Xiaomi 12 series. One of the teasers is with respect to the Xiaomi 12 camera. According to Lei Jun, from start-up to taking pictures, from backlighting to night scenes, Xiaomi 12 may be the phone with the highest speed in taking pictures. He claims that Xiaomi 12 has a new breakthrough in imaging. 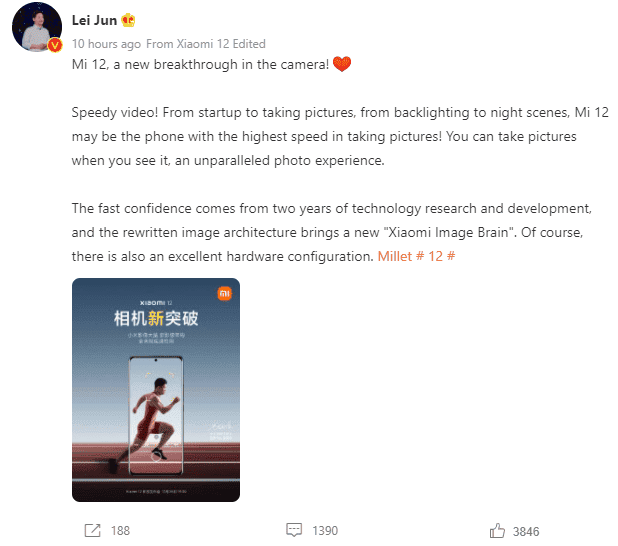 Lei Jun also claims that the fastness of this camera comes from two years of technology research and development. The company has also rewritten image architecture and has a new “Xiaomi Image Brain”. Of course, all this is not possible without the excellent hardware configuration.

Through two years of self-developed algorithm research, the imaging architecture has been rewritten, making the start-up speed and capturing ability of photos leap forward.

Previously, Zeng Xuezhong of the mobile phone department of Xiaomi Group revealed that Xiaomi 12 has the fastest capture. He also claims that this device has the strongest night scene. Furthermore, an official report shows that with Xiaomi 12 camera it is easy to retract and rewind in terms of performance schedule. 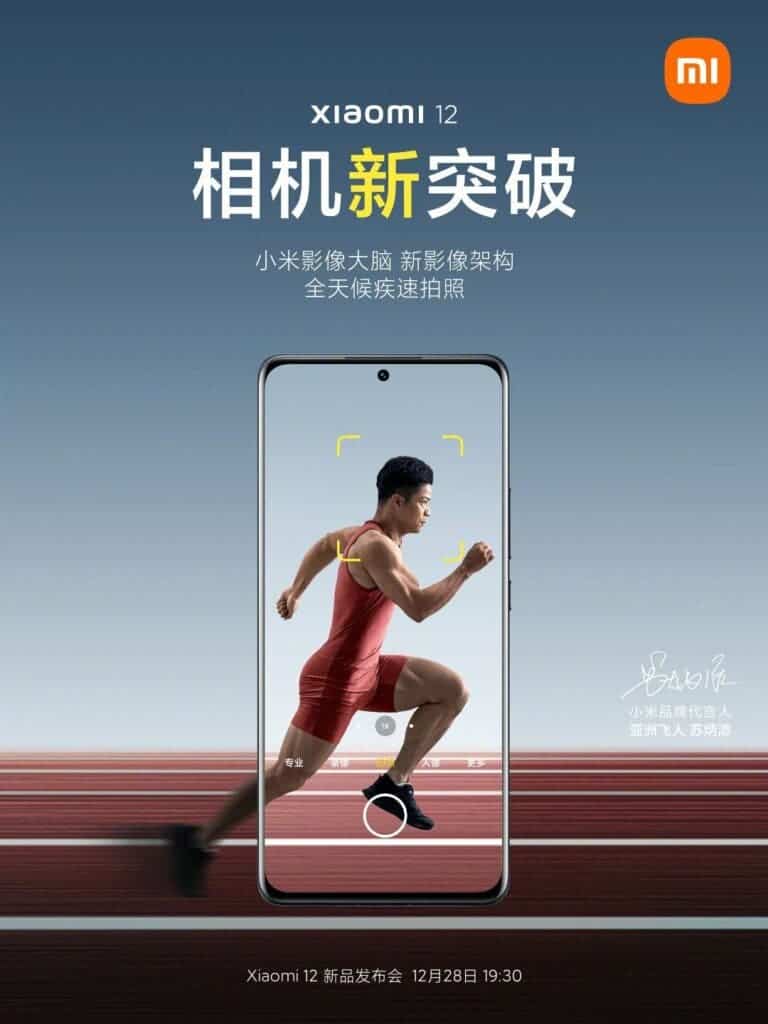 According to reports, the Xiaomi 12 and 12 Pro will use a flexible OLED display. Both smartphones will come with a Qualcomm Snapdragon 8 Gen1 SoC. On the rear, it will have a 50MP main camera that supports optical image stabilization. The standard version supports 67W fast charge while the Pro version supports 120W super fast charging.

Lei Jun, the founder of Xiaomi and the chairman and CEO of Xiaomi Group, issued a note saying that starting from the Xiaomi 12 series, Xiaomi’s high-end mobile phones have officially started to benchmark against Apple and learn from Apple. The Xiaomi 12 series has a large and small screen model. The Pro model uses a large screen while the standard model comes with a small screen. The Xiaomi 12 is the small flagship model with a top-notch user experience and configuration.

The small-size version of the Xiaomi 12 series should come with a FHD resolution. This is because resolutions above 2K will have a greater impact on battery life, and a more “stable” experience can only be obtained by ensuring battery life.

Lei Jun claims that the Xiaomi 12 series has a small and large model which meets the need of every user. The overall feel of this smartphone is superb. Xiaomi considers the Pro model to be an all-round high-end flagship with the ultimate configuration and experience. ​​​​

Previous OnePlus 10 Pro will use LTPO 2.0 to achieve a new high in fluency

Head of Xiaomi: Xiaomi 12 is a direct competitor of the iPhone 13!

Xiaomi 12 Pro will have a periscope telephoto lens

Live images of the upcoming Xiaomi 12 have been leaked