This year, Realme turned three years old and in a short time; it has acquired a large army of fans and gained weight in the market. The company believes that it has matured enough and gained experience to roll out a real flagship. It promises to be realme GT 2 Pro, whose premiere should take place on January 4, 2022.

In anticipation of the announcement, the company teases various features of the smartphone; and today it was again decided to talk about the camera. Earlier, the manufacturer has already announced that the Realme GT 2 Pro will offer a triple camera; where the main Sony IMX766 sensor is 50-megapixel; and we will have alongside it an ultra-wide-angle sensor with a viewing angle of 150 degrees. Now it became known that the second generation microscope-camera will act as the third sensor.

Compared to the first generation, the depth of field has been improved and the distance to the subject has doubled. In fact, we will have a smartphone with a built-in microscope; and it will be possible to “see” objects at a minimum distance. Apparently, the company followed the path of the parent company, which offered to create real macro photographs in the Oppo Find X3 Pro. We will find out after the announcement of the Realme GT 2 Pro how they will implement all this. 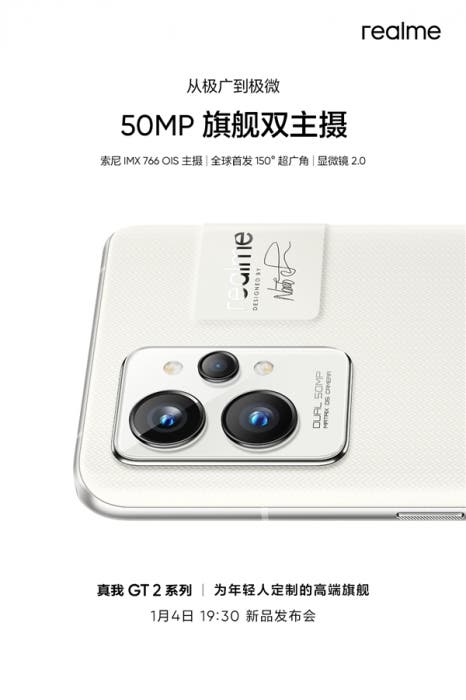 Global smartphone sales have returned to growth, and not least have spurred the market on the rise in popularity of devices with support for fifth-generation networks. In Western Europe, America, Japan, China and other countries, 5G infrastructure is being actively put into operation, and because of this, the demand for 5G smartphones cannot but increase.

Also, analysts believe that one of the main reasons for the growth in sales of 5G-smartphones Realme has a wide portfolio of models of the company in various price segments. Aggressive marketing is also among the incentives for selling Realme mobile phones. The company itself hopes that at least 100 million users around the world will appreciate the benefits of 5G thanks to its smartphones.

Previous No 5G mmWave? No Problem - Dimensity 9000 shipment is better than expected

Next New details on the Honor Magic V have been revealed