This time, they named the top 10 most powerful middle class devices at the end of December; and this rating can be considered the final one, which determined the best at the end of last year. The rating consists of those models that are available in China, the global rating will differ among the participants; because not all smartphones are sold outside the Middle Kingdom. All the participants of the “ten” of the most powerful have collected more than 500 thousand points.

To begin with, we note that nine out of ten places were taken by models with Qualcomm chips. Of these nine positions, eight fell on smartphones with Snapdragon 778G / 778G +, and one line was won by a device with Snapdragon 780G. Only Oppo Reno6 5G with a Dimensity 900 processor managed to dilute the monopoly of “dragons”, which managed to cling to the ninth line of the rating.

The leader with 567,524 points was iQOO Z5, leaving Honor 60 Pro and Oppo Reno7 5G in second and third places. The fourth position was given to Xiaomi Mi 11 Lite with Snapdragon 780G. In fifth place was the Honor 60, followed by Xiaomi Civi, Honor 50 Pro, Honor 50 and Huawei Nova 9 Pro. 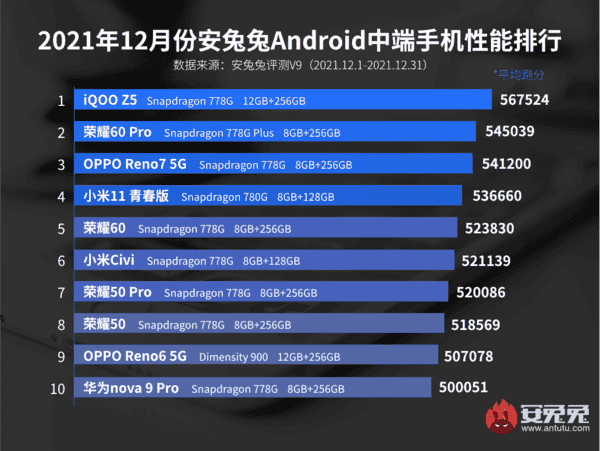 AnTuTu benchmark named the most powerful smartphones in December 2021

The well-known Chinese benchmark AnTuTu has also published a ranking of flagship smartphone performance for the last month of the past year. The gaming leader has remained the Xiaomi Black Shark 4S Pro since its release in October; thanks in large part to the flagship Snapdragon 888 Plus chipset and an unprecedented 16GB of RAM.

The “Top 10” flagships did not include smartphones on the latest Snapdragon 8 Gen 1 platform, according to AnTuTu – “due to insufficient data . “It is expected that next month, when enough devices on the new chipset are tested; Moto Edge X30 and Xiaomi 12 Pro will occupy the top lines in the ranking – Apple products are not counted. To obtain average values, at least 1000 devices of the same model must pass through the benchmark.

The only smartphone with a flexible display that got into the top ten – Oppo Find N – took only fourth place. The rest of the foldable gadgets were not productive enough.

AnTuTu: Rating of the most powerful smartphones of the fall

AnTuTu named the most powerful Android smartphones in the global market