A couple of reports from users as well as tests reveals that in Apple iOS 15 and later versions, Siri seems to have lost the ability to evaluate songs in the Apple Music app. Usually, when listening to songs in the music library, you can ask Siri to “give the song a five-star or other digital score”. The virtual voice assistant will do it without hesitation. The ability to score songs with Siri in the Apple Music app was first introduced in iOS 8. When listeners listen to songs hands-free through CarPlay, exercise with AirPods, or make smart playlists based on ratings, they usually rely on this feature to score songs in their library. 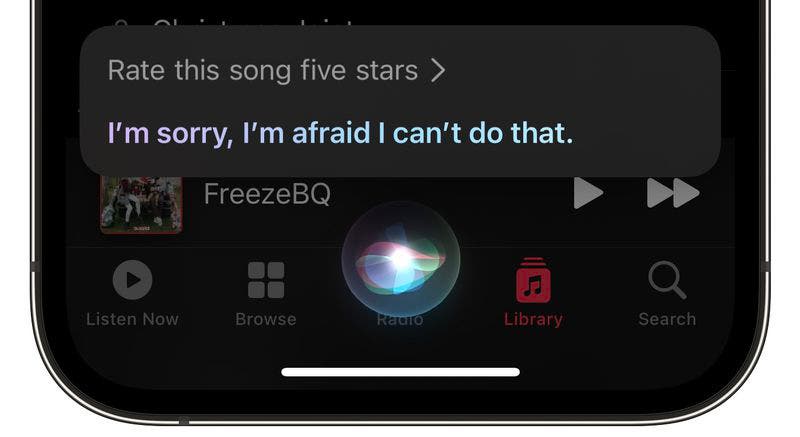 However, reports on Reddit, Apple’s support community, and some forums show that this feature is not available in iOS 15 or iOS 15.1. Furthermore, it is also not available in the latest iOS 15.2 official version. Siri did not execute the request, the response is “I’m sorry, I’m afraid I can’t do this”, or something similar.

It is unclear whether this is an intentional change by Apple or an intermittent server-side problem after the release of iOS 15. However, it is worth noting that both iOS 15 and iOS 15.2 have functional changes to Siri, involving Apple Music. In iOS 15, Apple has modified Siri to process some requests without an Internet connection. It can perform queries and identification faster when opening apps, setting alarms and timers, etc. . Then, in iOS 15.2, the company introduced a new Apple Music voice control solution, which relies entirely on Siri for music playback and user interaction.

This comes after Apple stopped signing iOS 15.1 for iPhone 13 models in November. Recall that the company released the iOS 15.1.1 update to cater for a bug affecting the current generation of iPhones. Now, since iOS 15.2 is available, iOS 15.1 and iOS 15.1.1 are no longer available for any model.

In case you missed it, the older version of iOS debuted back in October 2021. This system comes with certain features, some of which include COVID-19 vaccination certificates in the Wallet app. It also comes with SharePlay for Facetime, ProRes support on the iPhone 13 Pro series, and more. The ability to disable Macro mode also came with this update. If you or someone you know updated to iOS 15.2 and are facing issues, you will, unfortunately, have to wait for a future update instead of rolling back.