The Samsung Galaxy S22 Ultra benchmarks that emerged on Geekbench in the past few hours indicate that the gap between Exynos 2200 and Snapdragon 8 Gen 1 will still be quite substantial (in favor of the Qualcomm chip) and that the device will have less RAM than its predecessor, at least in the basic cuts. If there is not much to say for RAM – according to Ice Universe it will start from 8 GB, with options at 12 and 16 GB, while the minimum for the S21 Ultra was 12 GB – the question of performance should be a little in-depth. Meanwhile, let’s start with the recap screenshots: 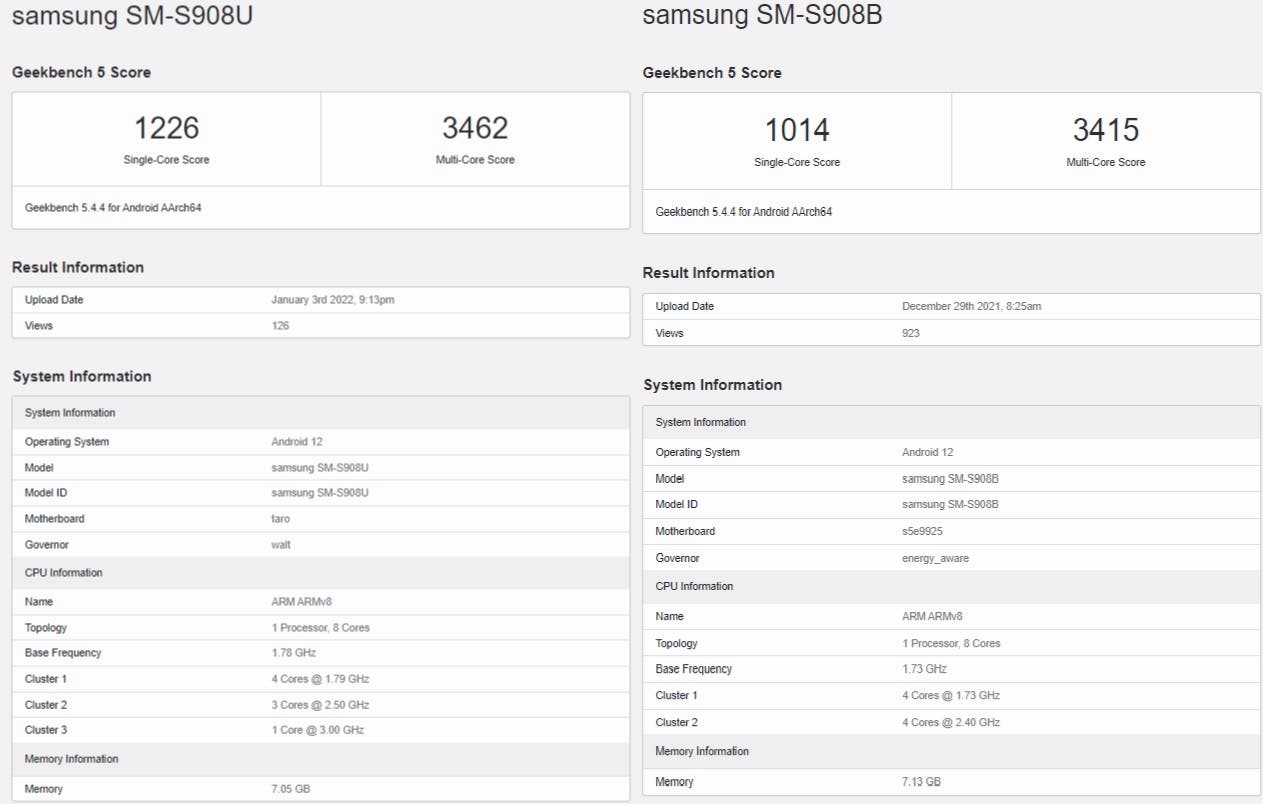 The Snapdragon model (SM-S908U) scores 1,226 points in single-core operations, while it reaches 3,462 points in multi-core; that Exynos (SM-S908B) is far behind in single-core, with 1,014 points, but is practically on par with the multi-core, 3,415. It could therefore be concluded that the flagship core, the Cortex-X2, performs much better in Qualcomm’s custom implementation than Samsung‘s. Already months ago it was rumored that, although clock rates were generally higher on Exynos 2200, S8G1 maintained a very slight advantage on X2; but the difference was so subtle (2.9 versus 3 GHz) that it hardly justifies such different results.

However, there is another detail, potentially much more important, to consider: the CPU governor; which is the algorithm that manages the clock frequencies of the various cores. Android offers several governors and manufacturers can implement others at their convenience; we can define it as a system for balancing performance and energy consumption (and temperatures, consequently); based on the task to perform and the conditions of the rest of the components; for example low battery, or chip already very hot. Here we observe that two different governors are active in the two smartphones. “energy_aware” in the case of Exynos, “wait” in the case of Snapdragon.

We do not know what the names of these profiles correspond to, even if going to sense the first seems to conserve energy (and therefore likely to push less from the point of view of performance). “Wait” is a more ambiguous name – who knows, maybe it’s a different name for the same profile. Basically, the matter is: there is at least one parameter that is unknown and therefore we cannot say with too much certainty whether one chip is better than the other. It will probably be necessary to wait for the smartphone to come out and evaluate them in similar conditions; both as regards the synthetic benchmarks and for the real use experience.

Recall that S8G1 is official since early December, while the Samsung chip will be presented on January 11th. Incidentally, the big highlight of this chip will be the GPU, developed in collaboration with AMD; and based on the same RDNA 2 architecture as the Radeon RX 6000. The Galaxy S22s should arrive around February instead