TSMC completed the fourth quarter of last year with revenue of $ 15.74 billion, which is 5.7% higher than the results of the third quarter of the same year, and 21.2% higher than the revenue of the same period last year. Revenue for the whole year amounted to $ 56.82 billion. At the same time, exactly half of these funds were brought by technologies of 7 nm and thinner, while in 2020 they provided only 41% of revenue. Directly 5nm products provided TSMC with about 19% of annual revenue. 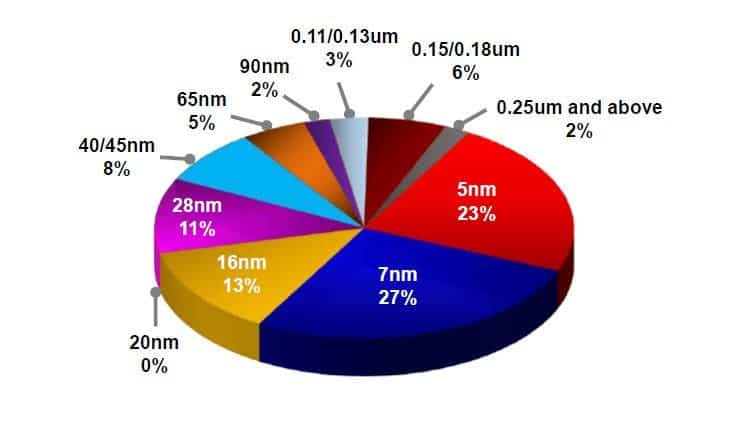 Revenue in 2020 was provided by 7nm products by a third, in 2021 its share decreased to 31%, but the share of revenue from 5nm products immediately increased from 8 to 19%. In its quarterly reports, TSMC explains that the decline in the rate of return for the whole of 2021 from 53.1% to 51.6% is mainly due to an increase in the share of 5nm products and unfavorable exchange rates, although this negative impact is partially offset by “continuing attempts to improve the cost structure “. Apparently, in this context, the increase in prices for TSMC services is implied. In the fourth quarter, at least because of this factor, the profit margin rose sequentially by 1.4 percentage points to 52.7%.

Operating expenses for the full year of 2021 represented no more than 10.7% of revenue, up from 10.8% achieved in 2020. Capital expenditures at the end of the fourth quarter did not exceed $ 8.46 billion, and in 2021 a little more than $ 30 billion was spent on the construction of new enterprises and the development of advanced technologies. Recall that by the end of 2023 TSMC is going to allocate about $ 70 billion for these purposes. TSMC shipped 3.725 million 300mm silicon wafers in the fourth quarter, which is 2.2% more than in the third quarter and 14.8% more than a year earlier. The conveyor load is close to maximum, there are almost no reserves for further growth without commissioning new plants and lines. In the coming year, TSMC is going to increase capital expenditures to $ 40-44 billion,

The structure of revenue by industry also changed over the past year. Smartphones at the end of the fourth quarter accounted for no more than 44% of TSMC’s total revenue; although a year earlier this figure was 51%. At the same time, the share of revenue generated by products for the HPC segment increased from 31% to 37%. These include central and graphics processors. The Internet of Things increased its share of revenue from 7% to 9%, automotive – from 3% to 4%; while the consumer electronics segment reduced its share of revenue from 4% to 3%. On the whole, at the end of the year, in monetary terms; it was the automotive segment that grew the most (+ 51%); followed by high-performance computing (+ 34%), while the dominant smartphones increased their core revenue by only 8%. The Internet of Things added 21%, 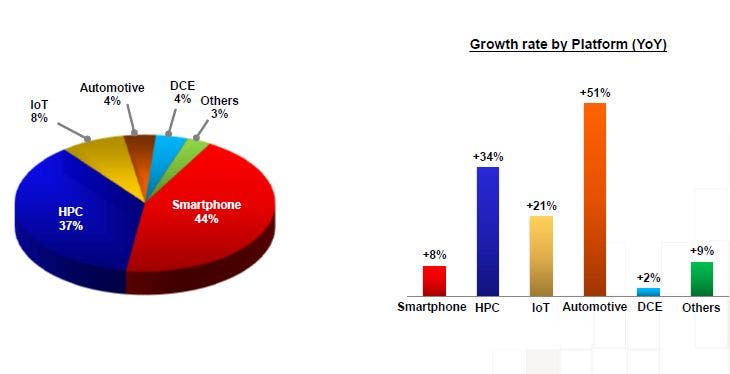 JP Morgan experts expect that TSMC’s revenue will increase by 25% by the end of 2022; as this will be facilitated by the growth in prices for the company’s services; as well as the flow of large customers represented by Qualcomm and NVIDIA from Samsung. The management of TSMC itself expects that revenue growth for the current year will approach 28-29%. Other industry analysts are also inclined to think that the cost of TSMC services will continue to grow this year. Morgan Stanley experts believe that accelerating inflation will have a negative impact on demand this year; and therefore TSMC may face some correction in demand; especially given the high dependence on smartphones, consumer electronics and personal computers; which together account for up to 70% of the company’s revenue.