For many smartphone manufacturers, small markets are not interesting. It’s logical. But there are exceptions. We think Singapore is the best proof. Its population is about 5.7 million. But it’s not about the numbers only. Well, at least, the smartphone makers take into consideration the incomes of people in a certain region, their preferences, habits, etc. In this sense, Singapore differs from many markets and the research results below will admit this concept.

In 2020, the Singaporean market shipped 1,4 million units. This number ought to reach 1.6 million by 2026. registering a CAGR of 1.69% during the forecast period (2021-2026). At the same time, there were around 5.17 million smartphone users countrywide. As for this figure, it should grow to 5.6 million by 2025. Also, the smartphone penetration rate in Singapore reaches 88.4%, according to Statista.

Interestingly, as various reports prove, the best-selling smartphone in the country’s history is the iPhone 6. But this is not accidental, as it is one of the most-sold smartphones on the globe. In two years (2014-2016), this model shipped over 220 million units worldwide.

A year earlier, another Apple model, the iPhone 7 was the most popular smartphone in Singapore. 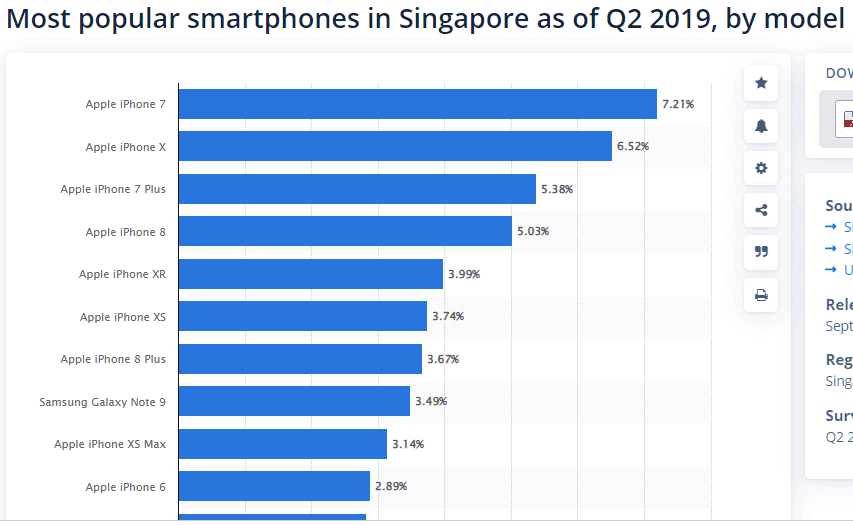 Even now, if believing in sites such as Mobile57 the Apple iPhone 13 Pro Max and the Samsung Galaxy S21 Ultra are among the top models in the country.

As for other numbers, approximately 84% or 4.83 million Singaporeans are now internet users. Lastly, this country showed high scores in the mobile connectivity index with an overall score of 83.42 out of 100.

In 2020, the Cupertino-based company was an absolute leader in this market. It captured over 33.6% of the Singaporean smartphone market. But other brands are worthy players as well. Among them, we can mention Samsung, Huawei (already is not on the list), Xiaomi, OPPO, Lenovo, LG (no more representatives too), Nokia, etc.

As Canalys reports, Xiaomi could break into the top three for the first time in the second quarter of 2021. Due to 248% growth year-over-year, the Chinese company quickly filled the gap left by Huawei. Though the 15% market share difference between is huge in comparison to Apple’s 29% and Samsung’s 31%, it is the fastest-growing brand in Southeast Asia. So everything might change soon. Also, other Chinese manufacturers Realme and OPPO took fourth and fifth positions. 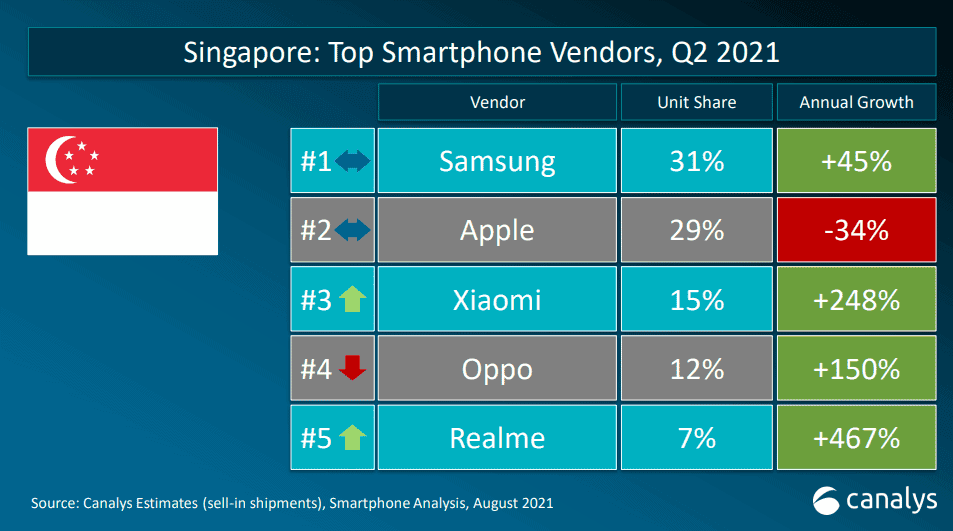 The list of top smartphone vendors in Singapore changes frequently. It’s related to the fact that users in this region buy new phones every 12 months.

However, the recent report from Statcounter shows that Apple and Samsung began yielding their positions. Starting May 2021, these two began capturing less market share, while ‘unknown’ brands skyrocketed.

This is an apt illustration of how a small market performs and what kind of preferences its customers have. But for Apple and Samsung, the rise of Xiaomi and other Chinese brands should be alarming.

Previous Black Shark 5 To Debut Soon: Snapdragon 8 Gen 1 Is On Board