Samsung mastered the 4nm process technology and called on AMD to help create a graphics subsystem, and the result of all the efforts was the Exynos 2200 chip. The processor should debut in the Galaxy S22 series, which should be presented on February 9th. On paper, the chipset looks interesting, it remains to evaluate it in real operating conditions.

Soon we will be able to assess the potential of the Exynos 2200, but not very encouraging information is roaming the net. So, it may happen that the new Samsung processor will not only lose to the Snapdragon 8 Gen 1, but also to last year’s Snapdragon 888 chipset. The well-known and authoritative Ice Universe insider, who posted the Exynos 2200 test results in Geekbench 5; and compared results obtained with Apple A15 Bionic, Dimensity 9000, Snapdragon 8 Gen 1 and Snapdragon 888.

According to the results of the test, the new flagship chipset Samsung lost to all competitors. Apple A15 Bionic turned out to be the most powerful of all, and Dimensity 9000 is in second place; leaving Snapdragon 8 Gen 1 behind. Ice Universe himself expressed regret that Dimensity 9000; which will find its application in the Galaxy A series, will be more powerful than Exynos 2200 installed in the Galaxy S22. It turns out that mid-range devices may be more powerful than the company’s flagships. 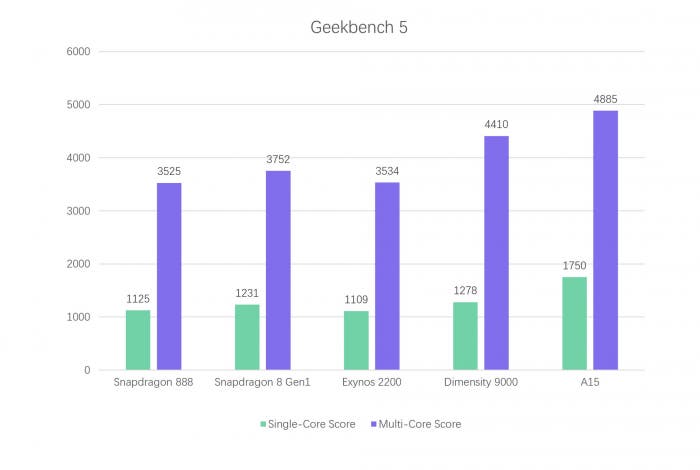 As expected, Samsung’s flagship platform comes with a new GPU based on the AMD RDNA 2 architecture found on the PlayStation 5, Xbox Series S and X consoles. The Exynos 2200 offers “the best mobile gaming experience”; thanks to the Xclipse 920 video accelerator, the fresh Armv9 architecture; and an improved neural core (NPU) that doubles the performance of its predecessor. Thanks to the new graphics subsystem, the chip is a “hybrid and one of a kind”; occupying an intermediate position between the processor for smartphones and the chip for game consoles.

The new Exynos 2200 processor and its Xclipse graphics accelerator support ray tracing and variable rate shading for smartphones; features that enhance the gaming experience and have so far only been available on PCs, laptops and consoles. Samsung has confirmed that the Xclipse 920 GPU is just the first generation of several AMD RDNA GPUs in plans for Exynos chipsets.

Ray tracing is a technology that mimics the behavior of light in the real world. By calculating the motion and color characteristics of light as it bounces off surfaces; ray tracing creates realistic lighting effects for graphically rendered scenes. Variable Rate Shading is a technology that optimizes GPU workload; allowing developers to use slower shading rates in areas that don’t affect overall quality; thereby giving the GPU more room to work in the areas most important to gamers and increasing frame rates for smoother gameplay.

Next Realme is close to overtaking Xiaomi and Samsung in India