That has been a long road for MediaTek from its demise with the unannounced Helio X30 to its return to glory with the Dimensity chips. The Taiwanese firm had troubles a few years ago with its chipsets losing in every aspect for Qualcomm. The company decided to retreat and rethink its strategy. In 2020, the Taiwanese firm brought solid 5G chipsets proving that this technology could be cheaper than what Qualcomm and its partners were practicing. Last year, the company unveiled the Dimensity 1200 which proved to be a valid alternative for many companies launching cost-effective flagship devices. The company gained the smartphone segment and decided to fly higher heights in 2022. After several years, MediaTek is back to the true-flagship segment with the Dimensity 9000 SoC. This chipset probably will be Qualcomm Snapdragon 8 Gen 1 biggest rival in 2022.

The Dimensity 9000 SoC arrived with marginally the same specifications as the Snapdragon 8 Gen 1 and Samsung’s flagship SoC the Exynos 2200. All three chipsets come with ARMv9 cores, are based on the same 4 nm architecture but the manufacturer differs. It’s Samsung for Exynos and Snapdragon, and TSMC for the Dimensity. All three chips are now official, and it’s natural to see the first comparisons and benchmarks popping out. Today, a new bit comes for Ice Universe and it’s quite surprising. According to the cat leaskter, the Dimensity 9000 may be the new CPU king of the Android market.

Geekbench 5 results for some processors pic.twitter.com/y7K6mS1Wya

The tipster shared some Geekbench 5 results on Twitter showing the Dimensity 9000. MediaTek chip clearly outperforms the Snapdragon 8 Gen 1 and the Exynos 2200 in both multi-core and single-core departments. If you’ve been following the benchmark scene, you probably know that similar results were spotted on AnTuTu. Worth noting, however, that the Dimensity 9000 and the Exynos 2200 results probably come from unfinished products. After all, these chipsets, while already announced are not actually “out” in the market.

We may see the first Dimensity 9000-powered smartphone in the next form from the Redmi K50 series or even from the Oppo Find X5 series. The results may be slightly different in the final products. Also, there is even room for software optimizations that can make it even better than on preliminary tests. The same goes for the Exynos 2200 which may appear in the next month too through the Galaxy S22 series. 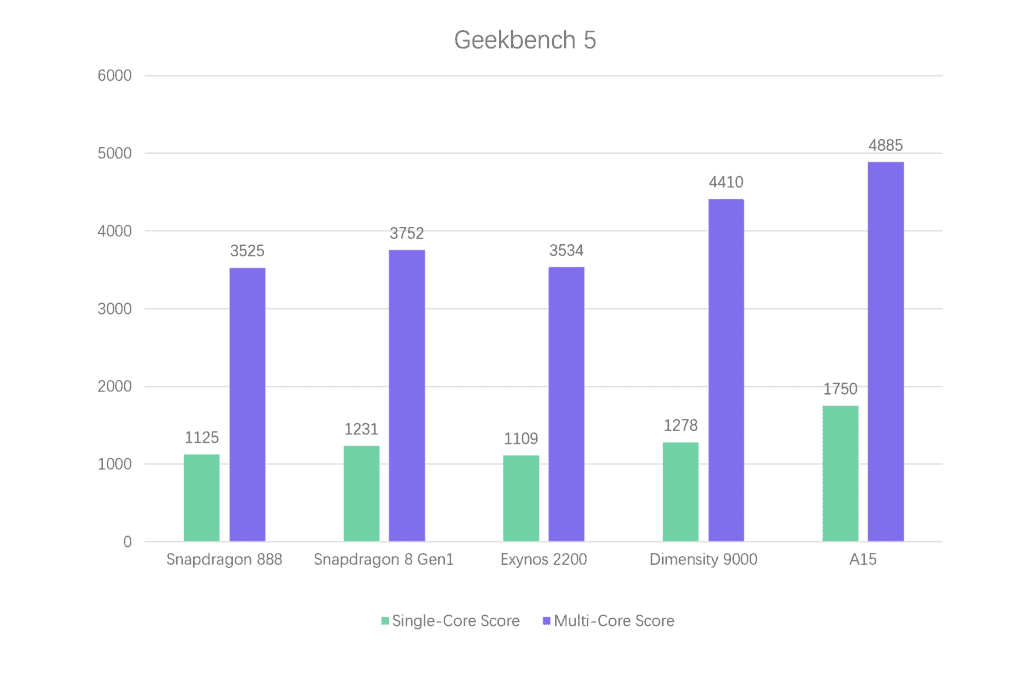 The Snapdragon 8 Gen 1 is already out in the market through the Xiaomi 12 series, the OnePlus 10 Pro, and the Motorola Edge X30. Qualcomm’s high-end offering still seems to be the preference of many brands for the super-premium segment. However, this may change soon, and Qualcomm may possibly experience some of the toughest years in the flagship scene. The company lost some market share due to the Dimensity 1200 success, the same can happen with the Dimensity 9000. After all, many companies are already preparing to launch at least one flagship with MediaTek’s offering.

As for the Exynos 2200, it’s a promising chip with AMD GPU. However, it’s hard to believe that it will do much harm to Qualcomm or MediaTek. After all, it will be only available in Samsung flagships.