Motorola turned a page back in 2021 and seems to be decided to go against the big ones in 2022. It’s good to see that, after all, with a giant like Lenovo behind it, we expect the brand to launch good flagship devices and nothing besides it! The company has shown its interest in competing in December when it became the world’s first smartphone brand to launch a device with the Snapdragon 8 Gen 1. The device in question reached China as Motorola Edge X30. Now, the rumors point out its arrival in global markets as Motorola Edge 30 Pro. A new report has now revealed details of the next Motorola flagship smartphone. This device is the so-called Motorola Frontier which is promising to be one of the best flagships of 2022. The device has the codename “Frontier 22” and has its specs leaked.

According to the leaks, the Motorola Frontier will pack the Qualcomm Snapdragon 8 Gen1 Plus. That’s right, the upcoming flagship will pack an unreleased Snapdragon 8 Gen 1 Plus, which as the name suggests, is an improved variant. That particular variant could come earlier than usual and may go with the rumors of Qualcomm sourcing some of its chips from TSMC. We don’t know exactly what are the improvements, but we expect a slightly higher clock speed for the X2 and A710 cores. 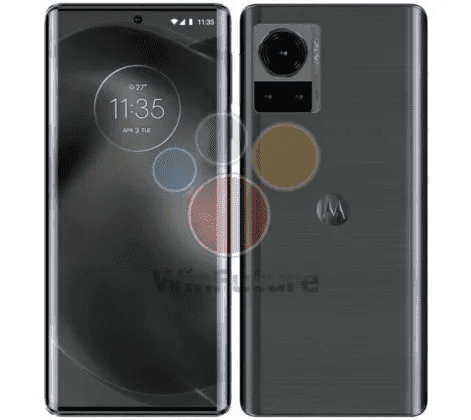 In addition to the key specs, the folks at WinFuture also uploaded the design renders of the upcoming Motorola flagship. The device will have a rectangular camera module with a triple-camera setup on the back. Moreover, it will feature a 200 MP main camera sensor with OIS support. It also has a 50 MP ultrawide camera and a 12 MP telephoto camera for 2x optical zoom. For selfies, the device will bring the same 60 MP front camera as the Edge X30.

Motorola could also become the first company to unleash a 200 MP camera smartphone. At the moment, we know that Xiaomi is also working on one. These companies will fight again to see which will be the first.

The Motorola Frontier will draw its powers from a 4,500 mAh battery with 125W wired fast-charging, and 30W or 50W wireless charging. The device will go on sale starting July 2022. There is no official word from Motorola regarding the launch of the rumored flagship.

All the rumors are pointing to a mid-year release, in special with the fact that this Snapdragon 8 Gen 1 Plus is a mid-year refresh. So we expect more leaks to keep popping out in the coming months.