The Itel A58 series featuring the Itel A58 and A58 Pro smartphones have been launched in Nigeria and Kenya with sufficiently good specifications. These recently unveiled smartphones boast a lot of similar specifications. The most notable difference between the two handsets is in the memory and built-in storage department. Moreover, the series offers seamless operation through the i-boost 1.0 feature and is backed by a robust 4,000mAh battery. Aside from that, the entry-level smartphones come with dual rear cameras with AI.

In the software department, the entry-level smartphones boot Android 11 (Go edition) OS out-of-the-box. Furthermore, they come with a microSD card slot that enables users to expand the devices’ onboard storage capacity. Now, let’s check out the Itel A58 and A58 Pro smartphones’ specifications and prices.

A microsite for the Itel A58 series has gone live on the company’s official website. However, Itel did not divulge details about the Itel A58, Itel A58 Pro smartphones’ price on the microsite. However, TechCity claims that the Itel A58 carries a price tag of NGN 35,000 (about INR 6,300) in Nigeria. A separate report by MobileTrends suggests that the handset will retail for KES 8,999 (about INR 6,000) in Kenya. Regrettably, neither of the two reports shed light on the f Itel A58 Pro smartphone’s price. The two handsets will be available in Starry Black, Sky Cyan, and Dreamy Purple color options.

Itel A58, Itel A58 Pro Specifications

Both the Itel A58 and Itel A58 Pro smartphones sport a 6.6-inch display with HD+ resolution and a screen-to-body ratio of 90 percent. Moreover, the screen has a waterdrop-style notch for the selfie camera. The phones pack a quad-core Unisoc SC7731E SoC under the hood. Also, the series comes with the i-boost 1.0 feature that delivers a smoother mobile experience. The Itel A58 will ship with 1GB of RAM and offers 16GB of built-in storage capacity. However, the Pro variant comes with 2GB of RAM and 32GB of onboard storage. 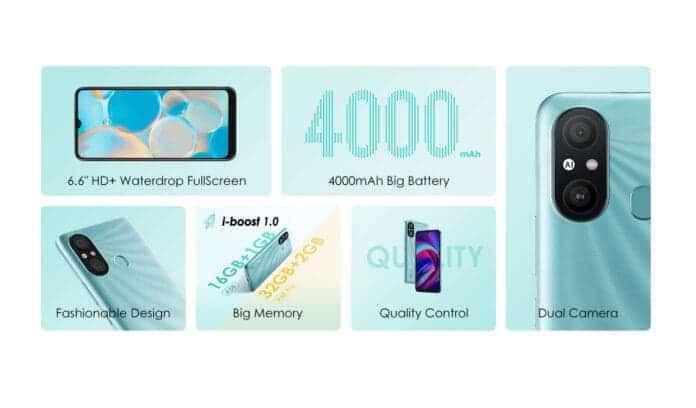 Furthermore, the Itel A58, Itel A58 Pro smartphones have microSD card slots that can facilitate storage expansion. In the photography department, the smartphones house a 5MP main camera, along with QVGA sensors. Upfront, they feature a 5MP shooter for capturing selfies and video calling. The phones draw their juices from a 4,000mAh battery. Aside from that, they have a rear-mounted fingerprint scanner. According to Itel, the phones can withstand dust, moisture, and normal drops.