AnTuTu evaluates the performance of smartphones in points on its own scale. They do this on a regular basis, identifying the most powerful smartphones monthly. January 2022 has passed and it’s time to find out the most powerful devices in the Android camp. The rating of top devices this month is interesting because it has undergone major changes due to the appearance of flagships with Snapdragon 8 Gen 1 on the market. 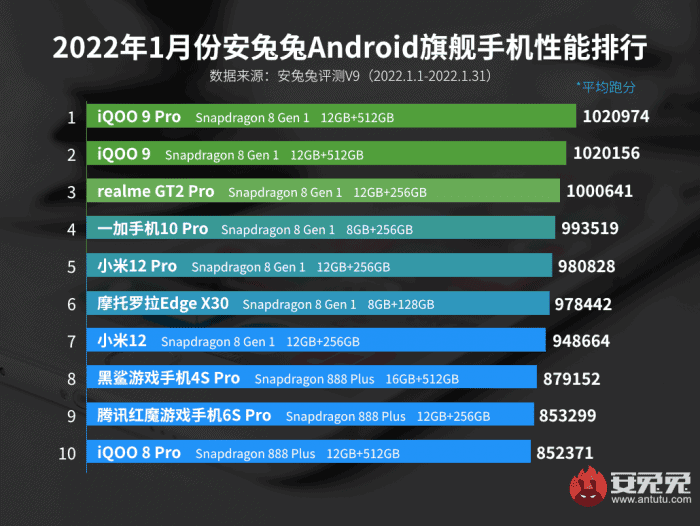 The first seven places were occupied by smartphones based on the latest 4nm Qualcomm platform. The best among them was iQOO 9 Pro with 12/512 GB of memory. According to the results of the test, the smartphone was able to score 1,020,974 points. iQOO 9 took second place with a small lag and its result was 1,020,156 points. Realme GT 2 Pro managed to get into the top three, which also managed to score more than 1 million points in the benchmark.

Fourth place went to OnePlus 10 Pro, leaving Xiaomi 12 Pro behind. The sixth line was taken by the Motorola Edge X30, which became the first smartphone on the market with a Snapdragon 8 Gen 1 chip. Xiaomi 12 managed to break into the seventh position. The flagships of last year, which received the Snapdragon 888+ chipset managed to hold the eighth to tenth line. Black Shark 4S Pro, Nubia Red Magic 6S Pro and iQOO 8 Pro. 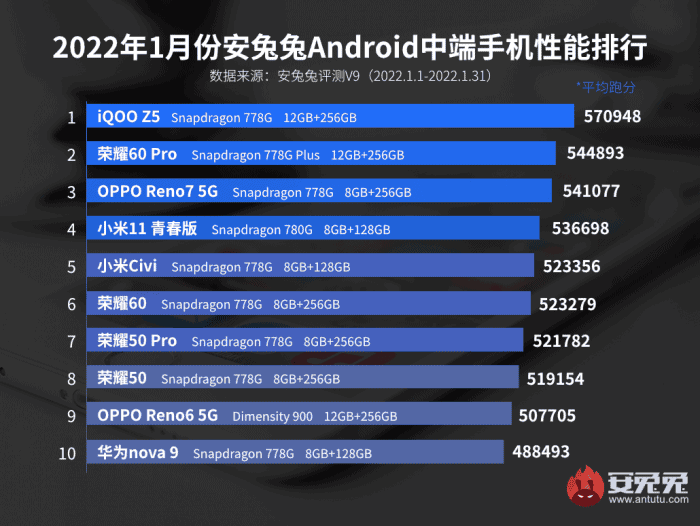 If we talk about the top ten most powerful mid-range devices, then calm reigns here. No new chips have appeared in this segment lately, so predictably there have been no major changes and it is confirmed that the most powerful chip in the middle-class niche is the Snapdragon 778G. Devices with this processor, including the Snapdragon 778G+ version, accounted for eight places out of ten in the ranking.

The first three lines were taken by iQOO Z5, Honor 60 Pro and Oppo Reno7 5G. In the fourth place, we have Xiaomi Mi 11 Lite, the only device with Snapdragon 780G platform. The fifth is Xiaomi Civi, the sixth position is taken by the Honor 60; and the seventh line taken by the Honor 50 Pro. Honor 50, Oppo Reno6 5G and Huawei Nova 9 took the eighth to tenth line.

Keep in mind that this rating is specific for the Chinese market and the global ranking will appear soon, so keep in touch with us; but it will not differ much in terms of processors that dominate the market.

AnTuTu: the best Android smartphones in terms of price/performance