Tesla has officially started rolling out its FSD (Full Self-Driving) test version in the Canadian market – marking the first international expansion of Tesla’s new assisted driving system. Since October 2020, Tesla has been gradually rolling out its “Full Self-Driving Beta” (FSD Beta). It is an early version of its future “Autopilot software,”. However, only users who actively apply and pass their “Security Test Score” can try it. With FSD, you can enter a fix and have the vehicle navigate the road automatically. Nevertheless, the driver needs to be alert and ready to take control at all times. 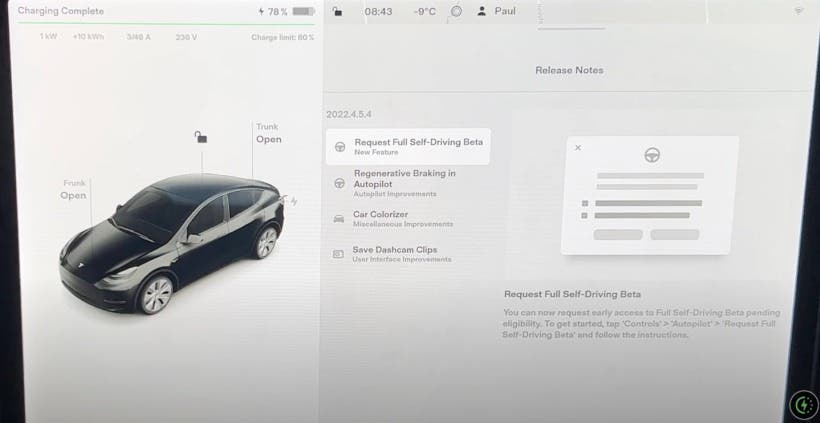 Since the responsibility rests with the driver and not Tesla’s system, despite the name, it is currently a Level 2 self-driving system. The owner must always be ready to take over for manual driving, although it currently works in most situations. It is worth mentioning that this is a kind of “two steps forward, one step back” assisted driving program, especially some updates often show a setback in driving ability.

Since the beta release, Tesla has been frequently updating the FSD Beta software version and expanding it to more users.

As of the fourth quarter of 2021, Tesla has nearly 60,000 test owners in the FSD Beta program, all of them in the US, of course. However, a few days ago, Tesla expanded its FSD beta to Canada. Elon Musk has repeatedly promised to expand the FSD beta in Canada.

The company has started rolling out the latest software update (2022.4.5.4) to some owners in Canada. This will enable the vehicle owners to “apply for the FSD Beta”. If the owner “requests”, Tesla will provide their daily driver “safety score”. If the owner scores high enough, Tesla may push the latest FSD Beta software to it.

Musk recently said that Tesla had previously conducted FSD Beta internal testing of about 60 vehicles in Canada. Now ordinary car owners who buy the FSD package can also test. This will greatly increase the number of test vehicles.

A few days ago, a Tesla car using the fully self-driving FSD Beta version was caught on video hitting a road post. This may be the first incident on the FSD Beta version. Last month, Tesla CEO, Elon Musk claimed that Tesla’s FSD beta version has not had an accident in more than a year of the program. There have been complaints that the Model Y FSD Beta causes a crash. However, there is no confirmation for these reports.

Although it is a minor accident with only a little paint scratch, it is still an accident. However, Tesla is not responsible for the FSD Beta. It’s an early version of Tesla’s Autopilot software and is currently in testing with its “safety test scores”.

The video was shot in downtown San Jose using FSD Beta version 10.10 (2021.44.30.15). The driver can be seen trying to correct the trajectory when the vehicle is about to hit a road post.

Next Breaking: OxygenOS will stay alive! OxygenOS 13 will go back to near-stock UI