Many know ZTE due to its sub-brand, Nubia. But this company is much more than Nubia. It’s a major international provider of telecommunications, enterprise, and consumer technology solutions for the mobile internet. Why we talk about this is to show what potential this brand has. Anyway, a few years ago, to avoid the sanctions, the company had to pay a few billion dollars to the US. This made the manufacturer slow the pace of its development. However, recently, the brand has already managed to release a few interesting models. We can say the same for the Blade V40 smartphones launched today at the MWC 2022. In fact, the series includes up to four new models. They are going to be available globally in April. They are low-to-mid-range smartphones but they are worth our attention.

Other than that, the Blade V40 Pro has a 64 MP main camera as well as a built-in 5100mAh large battery. The latter will quickly get back to the full power state due to the 65W fast charging. By the way, we are dealing with the fastest charging phone in the Blade series. 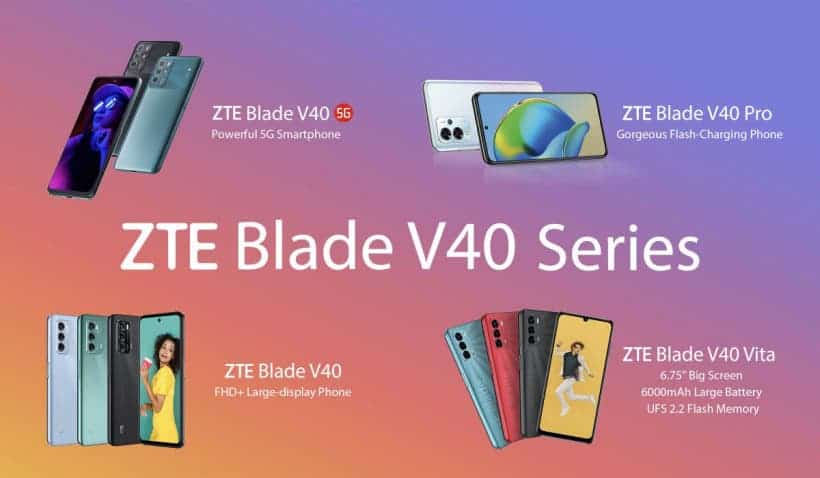 However, the main camera has a 48MP resolution. There are also macro and depth-of-field sensors. The front-facing camera has an 8MP resolution, which is enough for making high-quality video calls. The 5000mAh battery supports 22.5W charging.

Apart from the low-end models introduced above, there is a mid-ranger that supports 5G networks. The ZTE Blade V40 5G is powered by the MediaTek Dimensity 700 chip. Also, it comes with a 360° antenna for stable connectivity. On the front, we can find a 6.67-inch display, which has a 1080 x 2400 resolution. Besides this, the handset runs MyOS 11 (Android 11) and has 6 GB RAM as well as 128 GB ROM storage. The main camera uses a 48MP sensor. The battery has a whopping 6000mAh capacity (5130 mAh in some areas) and supports 22.5W fast charging.

However, the machine is equipped with another UNISOC octa-core chip and the RAM is only 3 GB. Fortunately, it still provides 128 GB of storage (UFS 2.2), and three card slots (two SIM cards and a microSD).

Next Besides Realme GT Neo3, It Is Working On Under-screen Camera Phone