Yesterday, Tesla CEO Elon Musk informed through his Twitter account that Tesla’s California factory is at full capacity and they are considering a major expansion.

Actually, we still operate our California factory, which is the largest auto plant in North America, at full capacity and are considering expanding it significantly.

It has built 2/3 of all electric vehicles in North America, twice as much as all other carmakers combined.

Which Factory Elon Musk Was Talking About?

At the same time, Elon Musk didn’t hesitate to remind his follower that Tesla’s California factory is the largest auto plant in North America. It is producing two-thirds of all electric vehicles in North America, more than twice as many as other manufacturers.

Also Read: Tesla Cars And Components Are Almost Entirely “Made In China”

The California factory that Musk was talking about is the vehicle assembly factory in Fremont, California. This is also the first vehicle factory that was producing Tesla cars. Not only that, this is where they are currently producing the most models. They include the Model S, Model X, Model 3, and Model Y.

Though Tesla is currently building the so-called Gigafactory, Elon Musk’s company didn’t build the one in Fremont, California itself. In fact, it was in operation in the 1960s. The initial owner of the plant was General Motors. But from 1984 to 2009, it was operating as a new joint venture between General Motors and Toyota. Then, in 2010, Tesla purchased it and began manufacturing the first Model S in June 2012.

According to information on Tesla’s official website, the factory in Fremont, California, covers an area of ​​370 acres and initially has 5.3 million square feet (about 492,400 square meters) of production facilities and office space. In 2016, Fremont city approved its expansion plans. In effect, the factory nearly doubled in space, reaching nearly 10 million square feet (929,000 square meters) of production and office space.

Judging from the pictures released by Tesla on the official website, there is still a lot of available space around their Fremont factory. It is also conducive to their large-scale expansion. 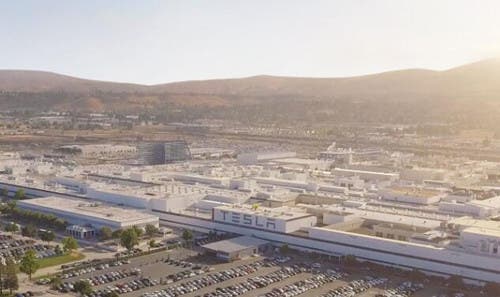