After Oppo Find X5 Pro, the second model with MediaTek’s new flagship processor, Dimensity 9000 is about to land. Redmi officially announced today that it will hold a new product launch conference at 19:00 on March 17. One of the devices that will arrive at the event is the Redmi K50 series. The Dimensity 9000 version in the Redmi K50 series should be the Redmi K50 Pro+.  Redmi officials are full of praise for the Dimensity 9000, saying that its “debut is the peak”. The company claims that the performance is really strong, and the power consumption is “ruthless”. No doubt, this device is worth looking forward to and we expect it to meet our expectations for performance and energy efficiency. 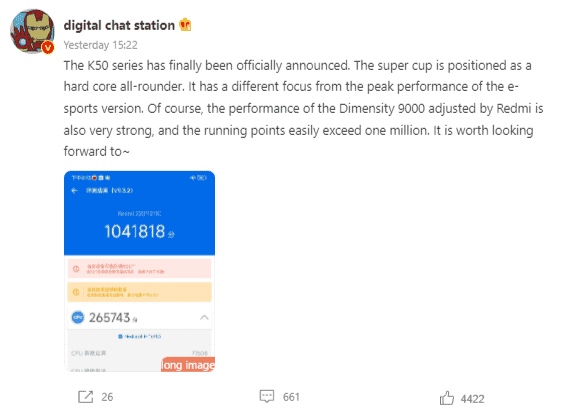 The Weibo blogger emphasized that the Redmi K50 Dimensity 9000 Edition is a “super-large cup product”. This means that it is the top model in the series. The top model in this series is the Redmi K50 Pro+. Of course, this is in the absence of the already launched Redmi K50 e-sports version which uses the Snapdragon 8 Gen 1 SoC. According to @DCS, the Redmi K50 Pro+ has a different focus from the peak performance of the e-sports version. However, he did not say whether or not both devices are on par in terms of performance. 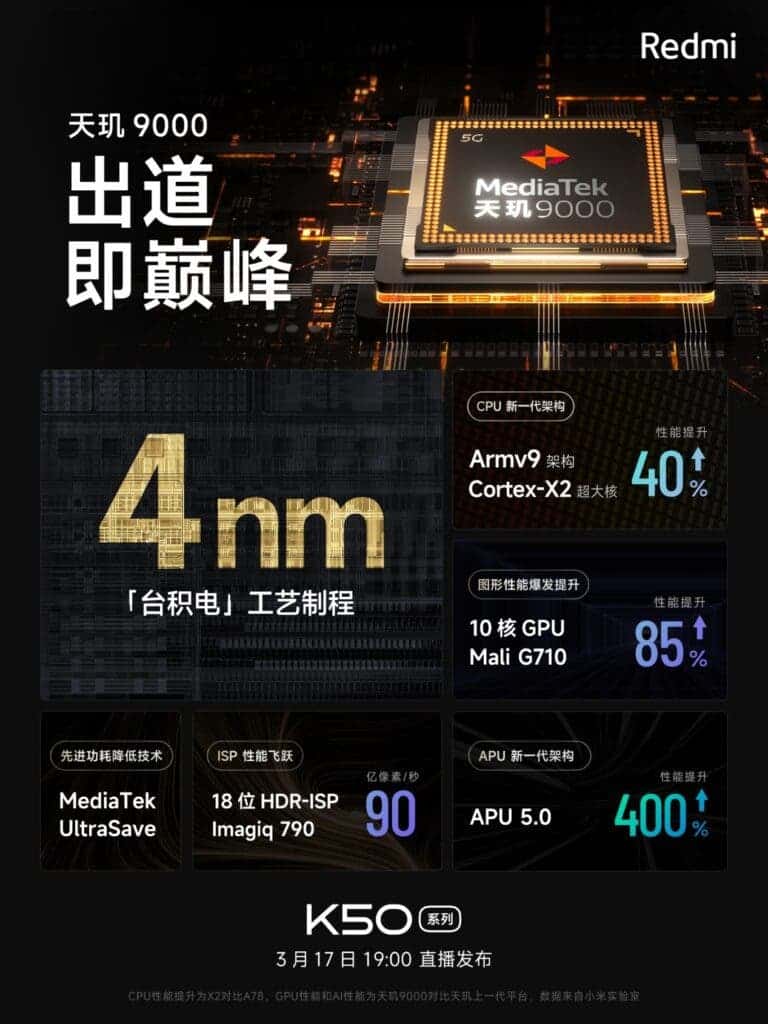 Of course, the running score is only one aspect. For users, the actual experience is more critical, such as how the game performance is and how the heat control is. According to the latest measured data from Redmi, the Redmi K50 Dimensity 9000 version runs Genshin Impact for an hour, the frame rate is stable at 59FPS, almost full-frame, and the body temperature is only 46 ℃. As you may know, it is generally difficult for competing products to go lower than 50 ℃.

As the chip performance gets higher, the temperature is also getting higher. Thus, there is a need to properly control the heat with a top-notch heat dissipation system. In addition, there are reports that the Redmi K50 Dimensity 9000 version uses a 6.78-inch large screen, so there is ample internal space.

Furthermore, it comes with more than 4000 square millimeters of VC vaporizing plates to control the SoC and body temperature. This smartphone also uses an X-axis linear motor. For a non-gaming smartphone, this heat dissipation system is quite impressive.