Vivo unveiled its S12 series back in December last year in China. Now, the company seems to be already moving on to release the Vivo S13 series. We don’t know if the best devices in the lineup will appear soon, but there are rumors suggesting the launch of a Vivo S13E variant pretty soon. This model has been spotted on the 3C certification website revealing the phone’s model number as well as the charging speed of the handset. In addition to that, a reliable tipster has confirmed some of the specifications of this particular handset as well as the colorways it is coming.

The alleged smartphone bearing model number V2190 has passed through the 3C certification website with the V2190A model number. As per the leaks, this is the Vivo S13E, a device that will be part of a bigger Vivo S13 family in China. Just like the Vivo S12 series, these devices may get a rebranding treatment to leave China. The Vivo S12 series, for example, was rebranded to Vivo V23 and Vivo V23 Pro in India.

On the 3C database, the phone is listed to support a maximum of 66W fast-charging with 11V and 6A ratings. Unfortunately, 3C isn’t very revealing when it comes to the specifications. Anyway, it does confirm this will be a 5G smartphone. 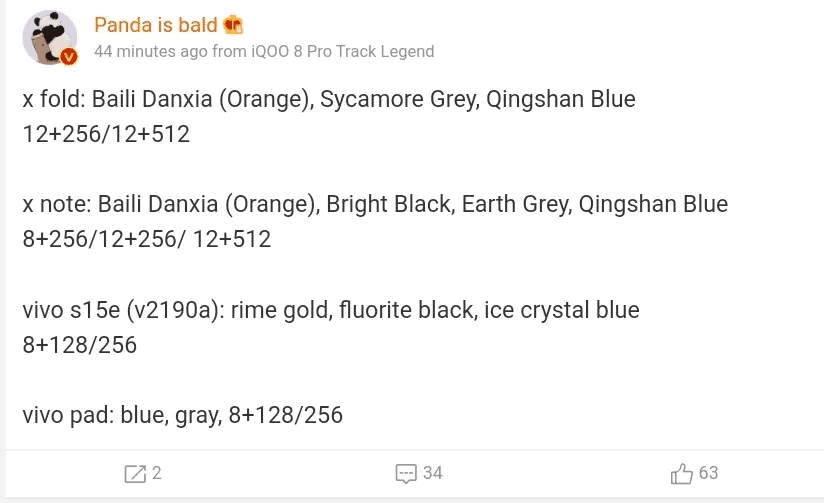 The Chinese leakster, Panda is Bald, has revealed the phone’s colorways. The Vivo V2190A will come in Rime Gold, Fluorite Black, and Ice Crystal Blue color options. The phone will also bring 8 GB of RAM and 128 GB of Internal Storage, there will also be another variant with 8 GB of RAM and 256 GB of Internal Storage. Anyway, the tipster stated that this phone won’t come as Vivo S13E, instead, it will arrive with the Vivo S15E moniker. We just can’t imagine why Vivo would jump straight to the S15.

Anyway, this Vivo V2190A already passed through the TENAA certification. According to the listing, the phone will pack a 6.44-inch Full HD+ AMOLED Display and we assume it’s a Full HD+ panel. Furthermore, the phone will come with a triple rear camera led by a 50 MP shooter. There will be also an 8 MP snapper, and a 2 MP sensor. We assume these are for ultrawide and macro shots respectively. There is a 16 MP selfie snapper. The chipset is unclear, but it will come with a clock speed of 2.8 GHz. The phone will measure 159.7 x 73.6 x 8.49 mm, the device will weigh 190.8 grams. Last but not least, the certification agency confirms a 4,605 mAh battery.

Worth noting that in Aprill 11, Vivo will present its new Vivo X Fold, X Note, and Pad devices. On April 13, iQOO will also introduce the iQOO Neo 6. April will be a quite hectic month for Vivo smartphone enthusiasts.

Previous Microsoft accused of bribery in the Middle East and Africa: $200 million a year