The Google Pixel 6a will hit the stores very soon. That’s why we are getting news concerning this handset more frequently.

When compared with the Google Pixel 6, we can see that the performance difference between the two phones in the GeekBench benchmark platform is actually very small. Thus, we have all reasons to think that the Pixel 6 and the Pixel 6a will be theoretically at the same level.

Other than that, the GeekBench screenshot shows that the phone comes with 6GB of memory and is expected to be equipped with the Google Tensor chip. It should be the Google Tensor GS101 chip, the same as the Pixel 6 series. 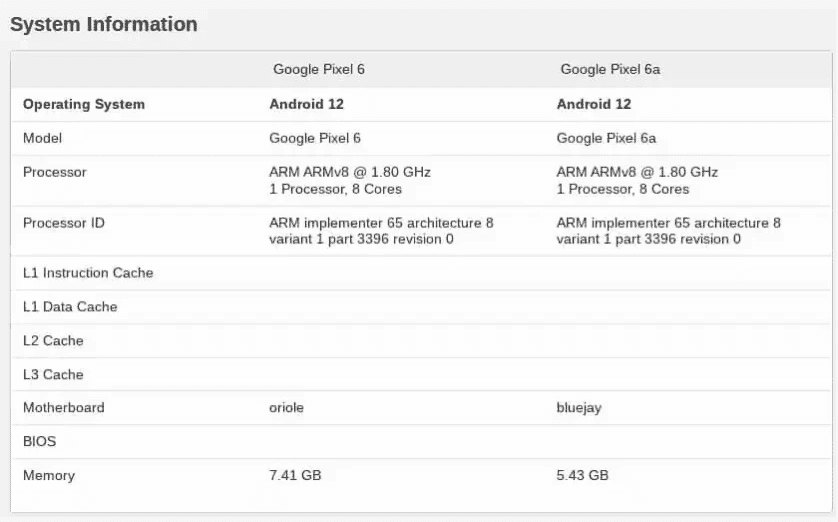 GeekBench also confirmed that the Pixel 6a is codenamed “Bluejay” and comes with Android 12 pre-installed.

Prior to this, we heard that Google will take wraps off the Pixel 6a on July 28. However, if believe this source, the phone will globally go on sale in May. Afterward, in October, this company would release its own smartwatch dubbed the Pixel Watch and the new Pixel 7 / Pro mobile phone series.

Recently, techxine exposed the box of Google Pixel 6a. From it, we could see what a look the handset will come with. As you can see from the picture, Google seems to be trying to adopt an iconic family-style design that unifies the design style of its smartphones. Shortly, the Pixel 6a adopts a look that is clearly similar to the Pixel 6. The gap between the Pixel 5a and 4a is still big.

Compared to the Pixel 6 and Pixel 6 Pro, the Google Pixel 6a appears to have a slightly smaller and thinner camera module. It will come with dual rear cameras and a banner matrix arrangement, just in line with the LED flash.

The Google Pixel 6a will have a 6.2-inch OLED display, but it will be slightly smaller than the Pixel 5a. In other respects, the machine will use almost the same design as the Pixel 6. According to some rumors, the phone’s camera will also have the same specs as the Pixel 6. However, this is still in form of a rumor. That’s why we couldn’t rule out the possibility that the phone might come with the Sony IMX 363 CMOS.

Android Headlines also mentioned some other parameters, saying that it comes with the latest Android 12 L system. As for the camera module, it ought to include a 12.2MP main camera and a 12MP secondary lens. Plus, this setup will support recording 4K videos. On the front, the Google Pixel 6a will carry an 8MP lens. The built-in battery is going to have a 5000mAh capacity and support fast charging. But still, we have no accurate information concerning the output power.

Next iPhone 13 gets a massive price cut in China