IDC analysts had already reported a decrease in the number of PCs shipped in the first quarter by 5.1%, their colleagues from Gartner announced an even sharper drop in shipments – by all 7.3%, but at the same time noted positive aspects. Those producers who are minimally connected with the consumer and educational segments feel good. Dell is one of the lucky ones.

According to Gartner, in the first quarter of this year, 77.5 million laptops and PCs were delivered to the world market, which is 7.3% less than the result of the same period last year. The authors of the study believe that the main culprit for the negative dynamics is a sharp decline in demand for student devices running Google Chrome OS. If we exclude them from the statistics, PC shipments in the first quarter even grew by 3.3%.

The second negative factor was the decline in demand in the consumer segment; which was felt even in relatively large and prosperous regional markets such as the US; but most acutely manifested in Eastern Europe with the start of Russia’s special operation at the end of February. Economic uncertainty has forced consumers to shift their priorities from buying computers to more pressing needs. 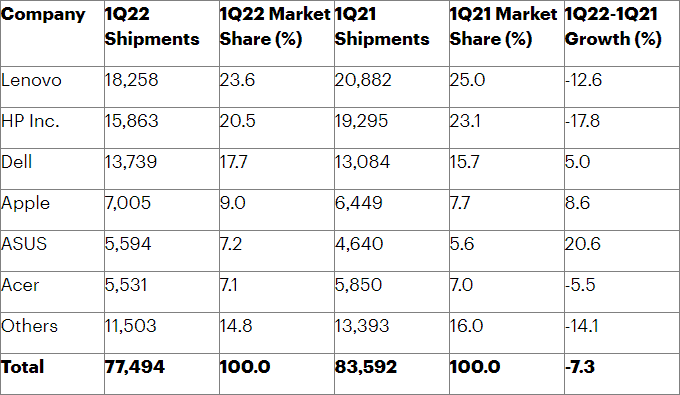 “After an unprecedented Chromebook surge in 2020 and early 2021, driven by demand from the U.S. educational market, Chromebook growth has tempered,” said Mikako Kitagawa, research director at Gartner. “It was a challenging quarter for the PC and Chromebook market to achieve growth, as this time last year the PC market registered its highest growth in decades.”

Dell, although it ranks third in the ranking of the largest PC suppliers with 17.7% of the global market; last quarter was able to increase product shipments by 5%; and in general, this is already the sixth quarter of consistent sales growth for this manufacturer. Dell is largely focused on the corporate segment, and it is now showing good momentum.

HP Inc. summed up the high dependence on the implementation of “Chromebooks”. In the first half of last year, it began to get rid of it; but this did not help to generate favorable statistics for the first quarter of this year; because the volume of supplies of PCs of this brand decreased by 17.8% in the world market; and in the USA it completely sank by 39, nine %. Lenovo reduced PC shipments to the US market by almost a quarter; but Dell increased them by 5.4%, and therefore was able to take a well-deserved first place in the market of this region.