One would think that, if not a majority, at least a significant portion of users have Android 12 installed. Indeed, it has been several months since the latest version of Google’s operating system has been available, while manufacturers’ shells are being revealed one by one. But it would be wrong to know the deployment habits of Android, which has tended to lengthen over time in recent years.

Thus, it is not really surprising to learn that only 2.6% of users have migrated to Android 12. This figure comes to us from a survey conducted by Uptodown, a 130 million user strong alternative store to Google Play. In fact, the operating system ranks fifth among the most popular OSs. Unsurprisingly, Android 11 takes first place with 29.5% of users.

The latter is followed by Android 10 (25.2%), then by Android 9 (11.5%), then by Oreo, version 8.1 of Android (11%). As mentioned above, these results are not unusual. It is now customary that versions prior to the most recent remain more popular than this one. This was particularly the case with Android 11 in 2021, which remained behind Android 10 for a long time even though a quarter of users had already adopted it. 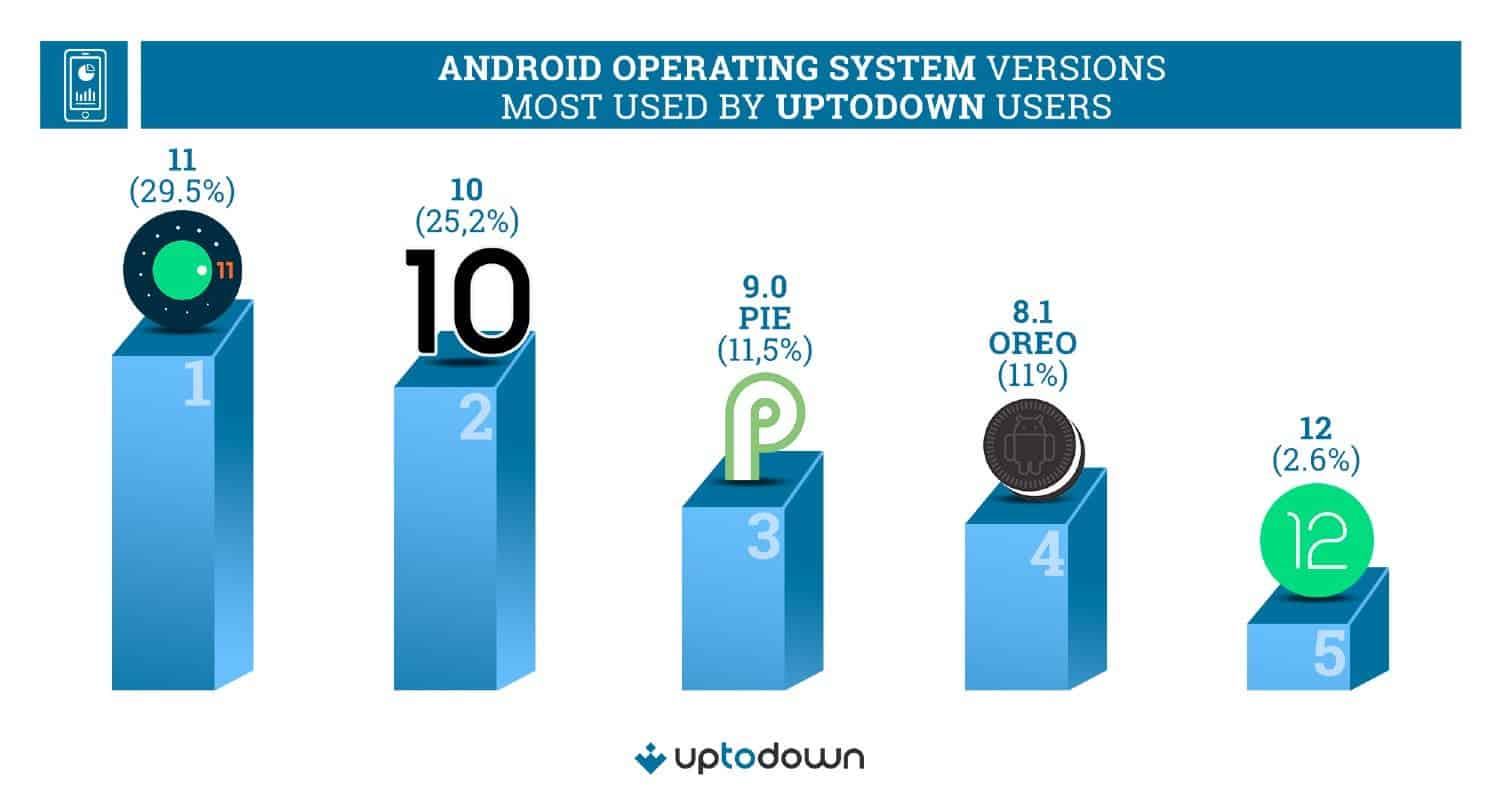 It is therefore only a matter of time before Android 12 takes hold on the majority of smartphones. The time that all manufacturers develop their user interface on the one hand; then that the need is really felt among users on the other hand. Besides, Uptodown also reveals the most popular smartphone brands. Samsung leads with 31.62% of the vote, followed by Xiaomi and Huawei, respectively with 16.31% and 11.07% of the vote. Finally, the most used browser is Chrome, well ahead of its competitors with 83.6% of users.

Google has recently officially announced the date of the annual Google I/O event; this year it will be held on May 11-12. Traditionally, at the event, the company presents a new version of its Android OS; and this year no changes are expected in this regard. So Android 13 will be presented on May 11, the first day of the conference.

Google I/O 2022 will be held in a partially open format. Only employees of the company are invited to the event, and everyone else will follow the announcements online. During the conference, the official premiere of Android 13 will take place, but the final version of the OS will be released only in the fall, and the first devices with Android 13 out of the box will be Pixel 7 smartphones.

Previous Gartner: 7.3% drop in PC demand mostly due to Chromebooks