A couple of days ago, a Russian media, Habr reported that at least dozens of GitHub accounts have been blocked locally. Among them, we can mention accounts of Sberbank, Alfa-Bank, other companies, as well as individual developers.

Further reading: Blocking YouTube In Russia: Why This Has Not Happened So Far

For example, GitHub has blocked the following accounts:

Earlier in April, the media reported that the US Treasury had imposed full blocking sanctions against the Russian bank Sberbank and Alfa-Bank, the country’s largest private bank. The sanctions include the freezing of bank assets and the imposition of a ban on US citizens and companies from doing business with them.

In this regard, researcher Sergey Bobrov said that GitHub has blocked his personal GitHub account as well. What’s more important, he is not related to any company:

By the way, when GitHub blocks a personal account, it gets a mark of suspended. Whereas when it blocks a corporate account, it gets a status of flagged. Apart from this, when blocking a corporate account, access to repositories data may remain for a couple of hours. When GitHub blocks a personal account, users lose access instantly. When blocking, Issues and Pull Requests to other repositories disappear. In this sense, it’s worth mentioning that some of the blocked accounts did not contain private repositories, only public ones.

Will This Touch All Russian GitHub Accounts?

Some users got emails saying that they can can manage their accounts from the sanctioned region: 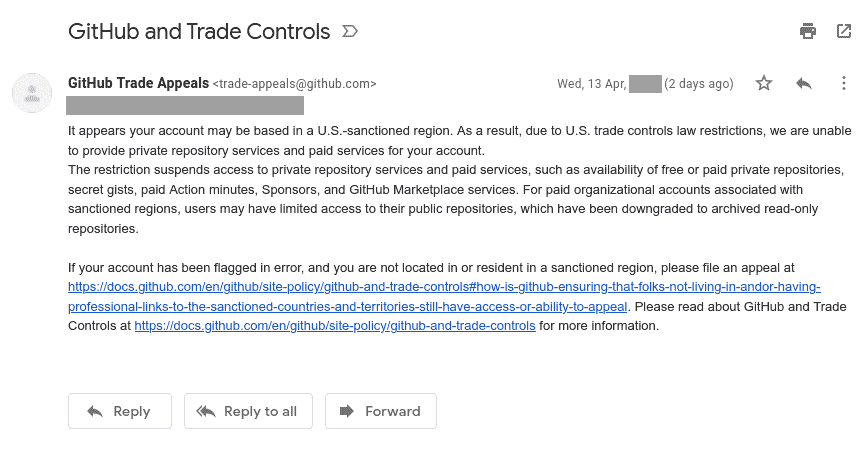 When following the links inside the email, users have to fill out an appeal. They should also indicate a relationship of the company or user with North Korea, Syria, Crimea, the LPR, and the DPR. 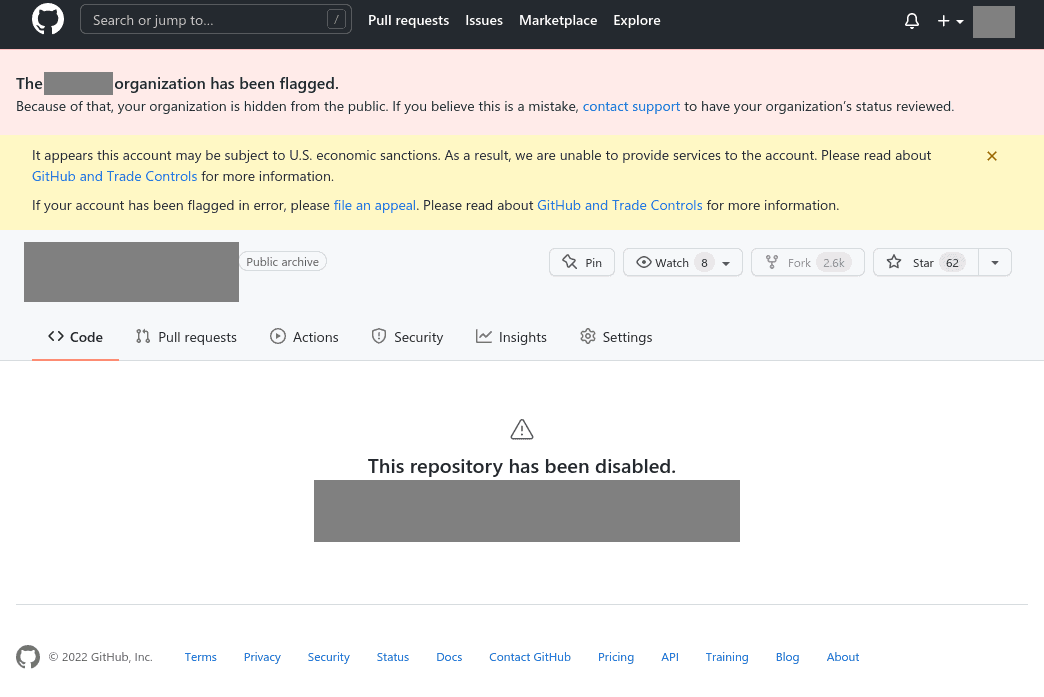 Well, this is not surprising. We mean on March 2, 2022, representatives of the GitHub web service for hosting IT projects ended the dispute over whether Russian developers should be blocked. The platform said that it will monitor the situation and will not block everyone. Prior to that, developers from around the world discussed the need to disable GitHub in the Russian Federation.

“GitHub’s vision is to be the home for all developers, no matter where they reside. We take our obligations with respect to government mandates seriously, which includes complying with stringent new export controls aimed at severely restricting Russia’s access to technologies and other items needed to sustain its aggressive military capabilities.

We also take seriously our responsibility to examine government mandates thoroughly to be certain that users and customers are not impacted beyond the scope of the mandates. This includes protecting open collaboration and the free flow of information in our interconnected community to support communications, humanitarian work, and organizing for change. You can read more about our policies on GitHub Docs.”

Previous 8 Best Smartwatches You Can Buy In Singapore In 2022

Russia accuses YouTube of being an information warfare platform

Amazon is providing logistics and cybersecurity support to Ukraine