Sony’s upcoming Xperia series flagship phone is going to be the Xperia 1 IV. Recently, the handset was spotted in GeekBench.

Apart from benchmark scores, we also learned that our protagonist has a model number XQ-CT54 and runs Android 12 out of the box.

The screenshot shows that the Xperia 1 IV will come with a chip called “Taro”. In fact, this is not a new processor but the Snapdragon 8 Gen 1. “Taro” is the codename of the latter. That’s why the benchmark scores are in line with the previous Snapdragon 8 Gen 1 results. Other than that, the phone leaked in GeekBench has a memory capacity of 12GB.

Prior to this, two Xperia 2022 models with model numbers XQ-CT72 and XQ-CQ72 have already obtained ECC certification. In this regard, the “XQ-CT54” is the European version of XQ-CT72. 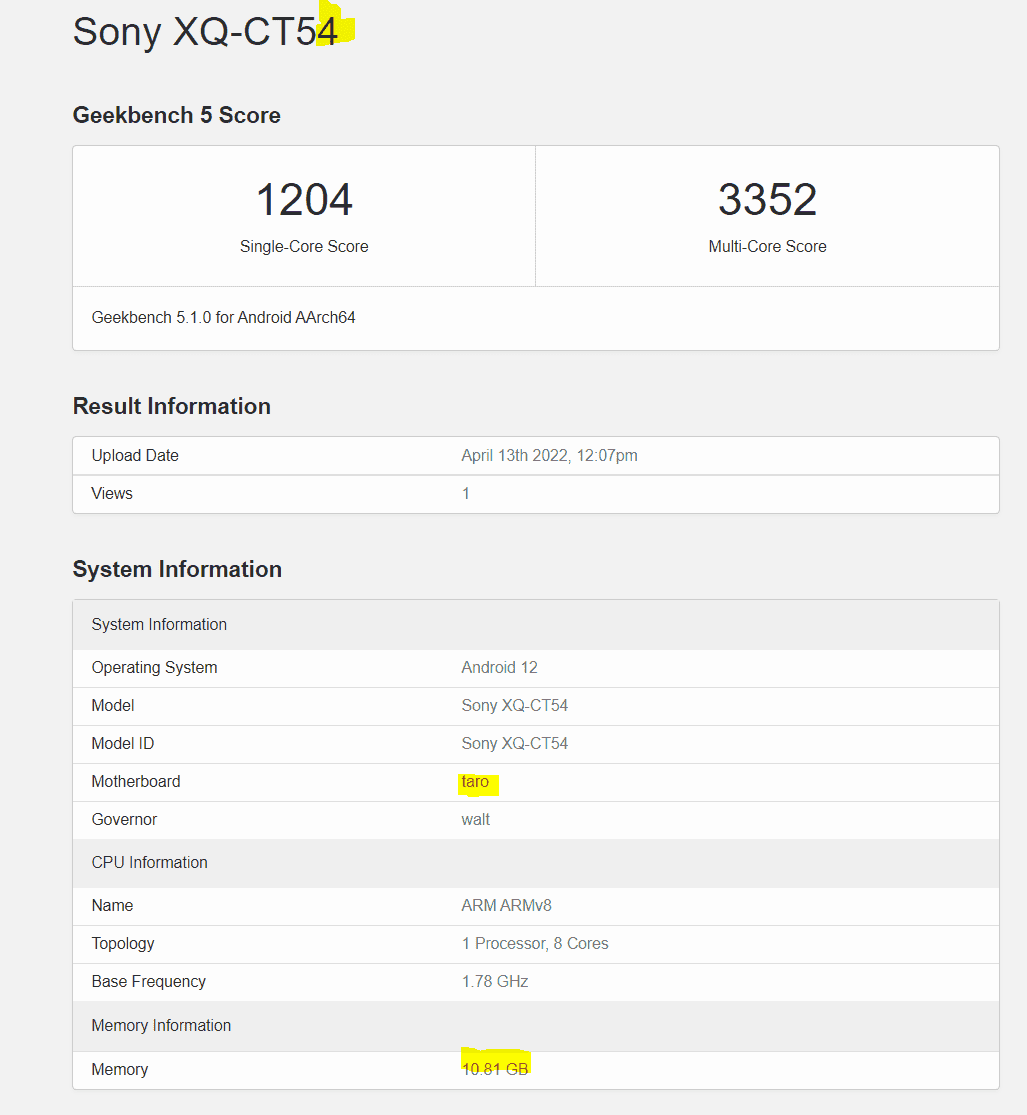 There have been some rumors suggesting that the phone will sport the Snapdragon 8 Gen 1 Plus instead of the vanilla version. However, from this screenshot, we can see that the Sony Xperia 1 IV’s chip has the same clock speed as the regular version of the processor. Plus, the same can be proven based on the benchmark score. We mean the multi-core test score of the Snapdragon 8 Gen 1+ ought to be around 4000 points.

This simply means that at least the European version and the US version of the Sony Xperia 1 IV are likely to be eSIM compatible.

Previously, we have learned that the Xperia 1 IV camera will receive a major upgrade. In its turn, this might lead to a 6% to 20% increase in price. The Xperia 1 III is already more expensive than most flagship phones in 2022. So it’s hard to say whether Sony will continue to raise the price of the new phone.

The Xperia 1 IV is also expected to sport a 6.5-inch 120Hz screen and a 5000mAh battery. Plus, it may retain physical fingerprint recognition and a 3.5mm headphone jack. Lastly, the Sony Xperia 1 IV will be quite sold due to the IP65 / IP68 standard and will receive stereo speakers.

Previous GitHub Accounts in Russia Blocked: No One Can Resist Sanctions

Next List of Xiaomi, Redmi and POCO devices that will update to Android 13