Based on Android 12, Realme UI 3.0 brings a wide variety of improvements, improved security and privacy, and a smoother experience. This version of the proprietary shell was introduced back in October last year; and for the past six months the company has been busy distributing it. It goes very slowly.

Before a stable build sees the light of day, Realme devices will have to go through a beta testing program that has recently added new members. The company has posted a list of devices that will receive the Realme UI 3.0 beta in the second quarter of this year. The new version of the shell in its beta version will reach Realme X7 5G, Realme 9i, Realme X3, Realme X3 SuperZoom, Realme 8 5G, Realme 8s 5G, Realme 9 5G, Realme Narzo 30 Pro 5G and Realme Narzo 30 5G.

Realme UI 3.0 based on Android 12: list of devices that will receive the beta

The first two models from the list will receive the firmware in May; following by Realme 8 5G, Realme 8s 5G and Realme Narzo 30 5G in April. Realme X3, Realme X3 SuperZoom, Realme Narzo 30 Pro 5G and Realme 9 5G will join them in the first month of summer. Unfortunately, we know nothing is about the timing of the release of the final version of Realme UI 3.0 for these and other devices from the company. However, we will for sure get more information in this regard in the following weeks. 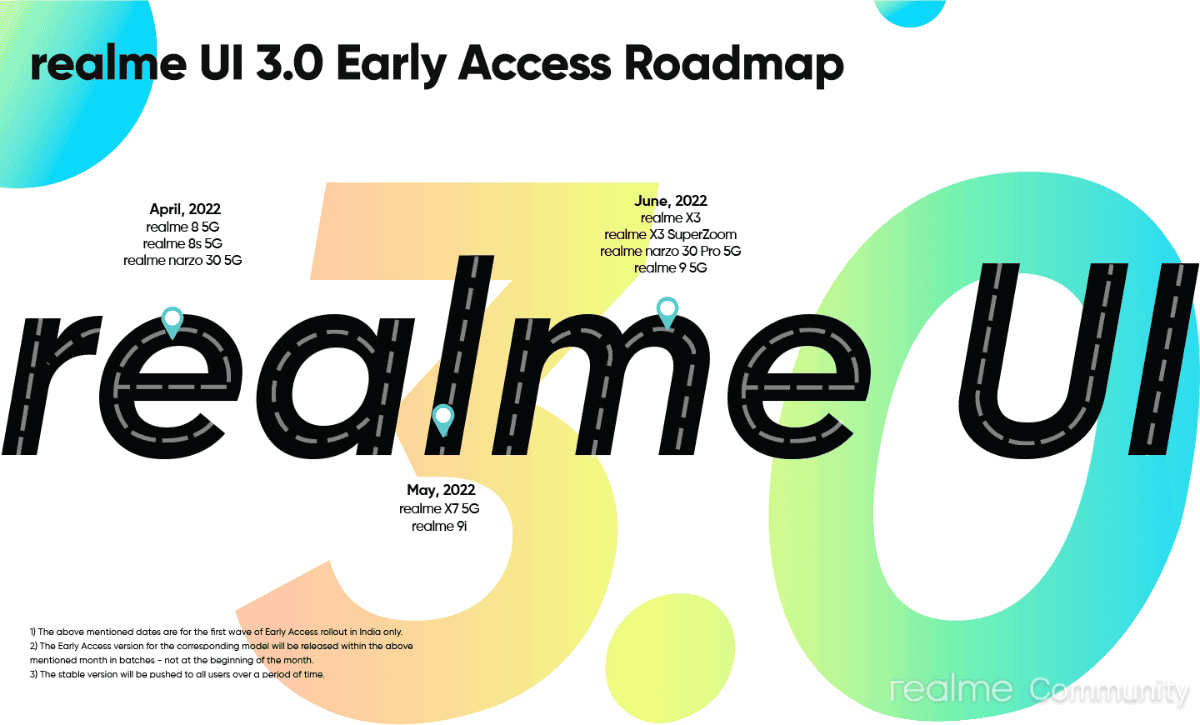 Earlier today, Realme announced the Q5i smartphone running the operating system Android 12 with the proprietary Realme UI 3.0 shell. A MediaTek processor is in use as a hardware platform.

It runs the Dimensity 810 chip. In addition to the 5G modem; this solution includes eight computing cores in the form of a bundle of Arm Cortex-A55; and Arm Cortex-A76 with a maximum clock frequency of 2.4 GHz. Graphics processing is handled by the Arm Mali-G57 MC2 accelerator.

The display has a size of 6.58 inches diagonally, has a resolution of 2408 × 1080 pixels; and a refresh rate of 90 Hz. An 8-megapixel camera is available on the front. The rear camera combines a 13-megapixel main sensor and a 2-megapixel component.

The smartphone carries on board 4/6 GB of RAM, a flash drive with a capacity of 128 GB; Wi-Fi 802.11ac and Bluetooth 5.1 adapters, and a side fingerprint scanner. Responsible for power is a 5000 mAh battery with support for 33-watt charging. The price starts at $190.

Next Details on the upcoming Xiaomi 12S, 12S Pro and Mix Fold 2 smartphones