We knew that Google would release a smartwatch sometime in the future. Moreover, the product has been in the works for a while. But the manufacturer hasn’t provided any details till the date. Well, we’ve learned about its features from various leaks. Also, we know that the Google Pixel Watch will be uncovered at the Google I/O 2022 event alongside the Pixel 6a on May 11.

Apart from its features, we have also got some renders that disclose the appearance of the Google Pixel Watch. Plus, the watch with the codename ‘Rohan’ has been leaked on various platforms, proving the latest version of the Wear OS onboard. 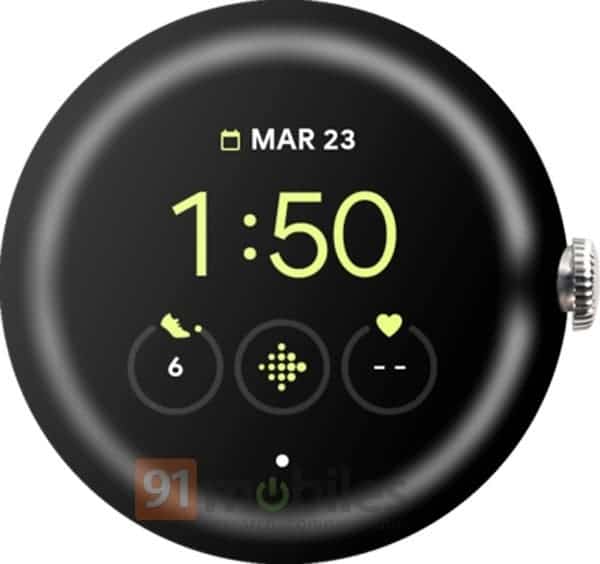 Today, 91mobiles showed the front of the Pixel Watch. In fact, it is in line with the previous leaks.

Anyway, from all those renders and leaks, we can say that this is going to be the company’s first own premium smartwatch. Let’s get into details.

The Google Pixel Watch (aka Rohan) ought to run the Wear OS 3.1. By the way, prior to this, the company jointly created the Wear OS 3.0 with Samsung.

As for the appearance, from the image below, we can see that it will sport a round display with a digital crown on the right side. We can also see the heart rate icon on the screen. Plus, there is a steps count and a Fitbit integration icon. [By the way, Google acquired Fitbit for $2.1 billion earlier this year.] Thus, this smartwatch will have a heart rate tracker, and of course, it will bring all popular features such as step count, and more.

Moreover, from the marketing images posted by FrontPageTech, we could learn that the Google Pixel Watch will come with calling feature support. Plus, it will have maps integration and sport a bezel-less display.

The Google smartwatch will have two colors – Black and Silver. But there will be more than 20 different straps.

We are dealing with a premium smartwatch that is going to compete with the likes coming our way from Samsung and Apple. And though these two have gone much further than many manufacturers in the market, there is every chance for Google to make tough competition to them. When saying this, we not only mean its acquisition of Fitbit but also its experience in making highly-demanded Pixel products. Plus, Wear OS ought to work more smoothly on the Pixel Watch as Android does on Pixel phones.

Previous Rumors: iPhone 14 will finally get a front camera with autofocus