Back in September last year, Xiaomi introduced the Civi series and it quickly became a hit. The Xiaomi Civi series came to replace the original CC lineup that was introduced after Xiaomi acquired Meitu – the company behind selfie-centric devices. The Xiaomi Civi became a hit due to its appealing package of specifications and affordable prices. Unfortunately, the lineup never left China, but apparently, this isn’t the company’s goal. The focus seems to be the Chinese market, which is about to get a new entry for the series tomorrow. According to a fresh new report, the upcoming Xiaomi Civi 1S will be the first smartphone to bring the Qualcomm Snapdragon 778G+ SoC at the helm.

Xiaomi has been teasing some of the details of the upcoming Xiaomi Civi 1S. Today, the company has confirmed that the phone will bring the Qualcomm Snapdragon 778G+. To those unaware, the Snapdragon 778G+ was introduced back in the last year by Qualcomm. As the name suggests, the chipset is a tweaked Snapdragon 778G+ introducing more performance and efficiency. It’s based on a 6 nm manufacturing process and brings 4 x ARM Cortex-A78 cores plus 4 x ARM Cortex-A55 cores. For graphical tasks, the phone has an Adreno 642L GPU which can handle most of the graphical tasks on Android smartphones. The phone’s hardware also includes Variable Resolution Rendering (VRS) and Game Quick Touch for enhanced performance. 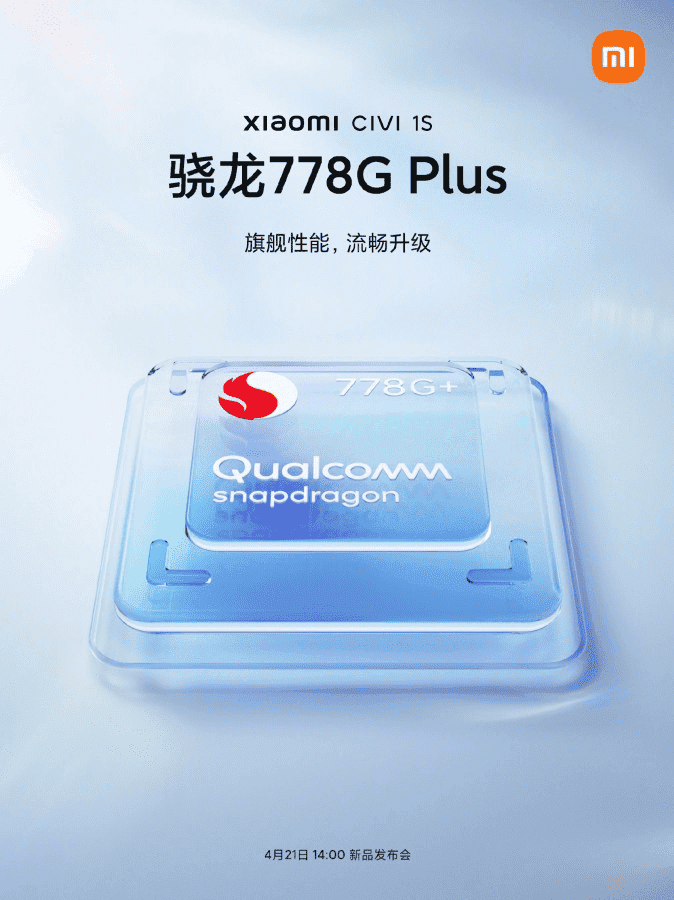 Xiaomi has been teasing the Xiaomi Civi 1S as one of the most beautiful smartphones in the industry. The device brings a gradient flashing diamond texture that is brought on top of a pure white color scheme. The phone is attractive for those that have fashion consciousness. Now, we know that the phone is more than just a beautiful design. It has a very decent processor that will set the standards for new premium mid-range smartphones in the coming months. Worth noting, that Motorola’s upcoming Motorola Edge 30 will also use the Snapdragon 778G+. Unlike the Snapdragon 8 Gen 1 case, Xiaomi managed to win the race this time around being the first to launch a phone with the SD778G+ platform.

Unfortunately, apart from the design and the processor, the company has been keeping a low profile with the Xiaomi Civi 1S hardware. This can’t prevent it from already being a success, however. The device already got 90,000 reservations ahead of its release. We expect it to come with a gorgeous OLED display with at least a 120 Hz refresh rate. It will also bring capable cameras and a large battery with fast-charging support.

All the remaining details will be revealed tomorrow at 2 PM China Time.