According to reports, a bug in Google’s Messages is causing the camera to run in the background. For this reason, some Android smartphone users are experiencing rapid battery drain. Furthermore, this bug also causes the smartphone to heat up faster. Two months ago, a Reddit user by the name of u/CozyMicrobe reported one of the first cases of this bug in the Google Pixel 6 Pro. He said

“…I’ve noticed recently that the camera is constantly on and there’s a little green dot in the corner,” the user wrote in a Reddit post. “It seems to start with opening the messaging app. I’ve also noticed that whenever this happens, the phone gets so hot that I usually just turn it off and let it sit for a few minutes because I don’t want to give battery stress. According to the battery usage section, the messaging app has been running for less than 12 hours in the past 24 hours.” 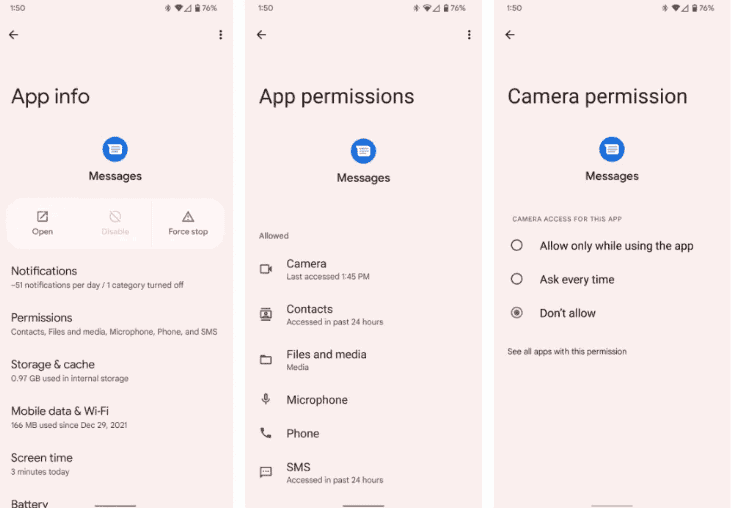 On Wednesday, 9to5Google confirmed this, noting that live feeds from the cameras have been running in the background. This prompt appears next to the gallery option when the user wants to upload an image to the chat. The bug caused the prompt to keep working even when the prompt was no longer on the screen, or the Messages app was just running in the background. This causes the smartphone to overuse the battery. The team dug further using Android 12‘s privacy metrics to verify the issue and found that Google Messages was indeed actively using the camera.

According to Google communications manager, Scott Westover, the team has discovered the bug and is rolling out a fix. Users can close the app from the Recents view, or set app permissions for Messages. To do this, just go to Settings > Apps > Messages > Permissions > Camera and select “Don’t Allow”.

AMP, or Accelerated Mobile Pages, is Google’s non-standard subset of HTML that renders page content so that it appears to come from the original publisher’s website, when in fact it is served by Google’s servers.

Google claims AMP improves site performance and simplifies the browsing experience. However, critics say the framework further monopolizes the web and is harmful to privacy. This is because it gives Google more information about which pages users visit and how they interact with them.